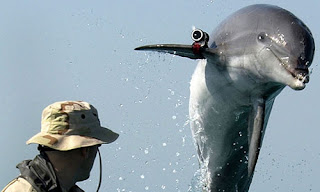 Bioethicist and animal rights activist Peter Singer says that the US-Navy is putting dolphins in harm's way in the Persian Gulf and that it is a form of speciesist enslavement that needs to stop.

Indeed, it's no secret that the US-Navy has trained dolphins to detect mines. And now, with tensions on the rise in the Middle East, they might be used in the conflict with Iran over its nuclear program. In response to the new sanctions, Iran is threatening to block the Strait of Hormuz--the only sear route out of the Persian Gulf, and what the US Energy Department calls "the world's most important oil choke." It's suspected that Iran may use mines to do it, and if so, prompt the Navy to deploy their mine sniffing dolphins in response.

Best estimates indicate that the US Navy has trained about 80 dolphins to detect mines. It is speculated that the dolphins only locate the mines and drop acoustic transponders nearby so that their human partners can destroy the mines.

But, as Peter Singer fears, it is also possible for the dolphins to set off the mines and die in the resulting explosion. Moreover, by using the dolphins in this way makes them – and any other dolphins in the area – targets for the Iranians to destroy if they can.

Animals, or at least those who are conscious and capable of suffering or enjoying their lives, are not things for us to use in whatever way we find convenient. To believe that, because they are members of a different species, we can ignore or discount their interests is speciesism, a form of prejudice against beings who are not "us" that is akin to racism and sexism. We should give equal consideration to the interests of any sentient being, where their interests are similar to our own.

Dolphins are social mammals, capable of enjoying their lives. They form close bonds with other members of their group. They respond to images of themselves in a mirror, and use the mirror to examine marks on parts of their body that they cannot otherwise see – a test that is widely taken to be a sign of self-awareness, which human children cannot pass until they are somewhere between 18 months and two years of age.

The United States no longer conscripts its citizens to fight its wars. All its human troops are volunteers. But even conscripts have some basic rights. The dolphins have none.

Dolphins have nothing to do with the dispute over Iran's nuclear plans, argues Singer. "Whatever the rights and wrongs of taking military action against Iran," he writes, "let's leave the dolphins out of it."
Posted by George at 1/24/2012

This reminds me of the conundrum I've found myself facing in the course of imagining the future: at what point do our intelligent machines become intelligent enough for us to have moral responsibilities toward them? There's a space between "insufficiently deep self-awareness to count" and "autonomous sentience." Currently we generally regard at least some intelligent mammals as being in that space, but it seems like the space might grow in the future. Further, there might even be financial incentives for AI developers to remain in that space so as to produce entities capable of cognitively-advanced feats while avoiding arguments that those entities should be treated like humans, with all the attendant legal rights.