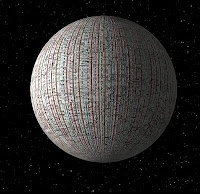 Great write-up and summary of our recent Dysonian SETI paper by Paul Gilster over at Centauri Dreams. Excerpt:


In a recent paper, Robert Bradbury, Milan Ćirković (Astronomical Observatory, Belgrade) and George Dvorsky (Institute for Ethics and Emerging Technologies) consider whether intergalactic SETI may be an example of what they call a ‘Dysonian’ approach to SETI, one that is a ‘middle ground’ between the traditional radio-centric view (with contact implications) and the hostile reaction of SETI detractors who see no value in the enterprise whatsoever and think the money better spent elsewhere. The nod to Freeman Dyson is based on the latter’s conjecture that a truly developed society would surmount the limits of planetary living space and energy by building a Dyson shell, capturing most or all of the energy from the star near which it lived.

A Dyson sphere immediately changes the terms of SETI because it is in principle detectable, but unlike nearby radio signals (either from a beacon or as unintentional ‘leakage’ from a civilization’s activities), a Dyson shell might be spotted at great astronomical distances through its infrared signature. Carl Sagan was one of the first to pick up on the idea and ponder its implications. Dyson was much in favor of attacking the question in a disciplined way, using our astronomical tools, as he once wrote, “…to transpose the dreams of a frustrated engineer into a framework of respectable astronomy.” And here again, we have seen attempts, especially by the aforementioned Richard Carrigan, to study infrared data for signs of such Dyson constructs.

The new direction in SETI that the three authors of the new paper champion is one that employs a broader set of tools. Rather than limiting itself to radio dishes or dedicated optical facilities, it broadens our workspace for extraterrestrial civilizations to include astronomical data that can be gathered in tandem with other research projects, scanning a far wider and deeper field. In the authors’ view, Dysonian SETI also takes into account new developments in astrobiology and even extends into computer science and the possibility of post-biological intelligence. They advocate a Dysonian SETI drawing on four basic strategies to supplement older methods:

The expansion of SETI into these areas would not replace ongoing SETI methods but would significantly expand the overall process in line with the great goal of learning whether other intelligent beings share the galaxy and the nearby universe with us. The paper offers more fruitful speculation than I can fit into a single entry, so we’ll be looking at these ideas over the course of the next few days. If there really is a Great Silence, to use David Brin’s phrase, these authors argue it’s one that we can only ponder usefully if we broaden our search toward the potentially observable achievements of cultures far more advanced than our own. That study has only recently begun.