Howard S. Friedman on the "real secrets to a longer life" 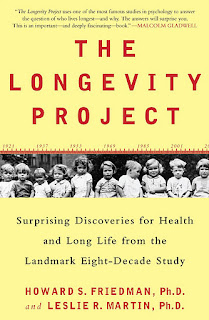 The key to a long life, argues Howard S. Friedman, is not by eating vegetables and going to the gym. Rather, he says, we should focus on having a "a rich, productive life." Amy Novotney of The Monitor recently interviewed Friedman, the author of The Longevity Project: Surprising Discoveries for Health and Long Life from the Landmark Eight-Decade Study to find out more.

Novotney asked, "Explain the effects of stress on longevity. Your research seems to show it may not be as bad for us as we think." To which Friedman responded:


There is a terrible misunderstanding about stress. Chronic physiological disturbance is not at all the same thing as hard work, social challenges or demanding careers. People are being given rotten advice to slow down, take it easy, stop worrying and retire to Florida. The Longevity Project discovered that those who worked the hardest lived the longest. The responsible and successful achievers thrived in every way, especially if they were dedicated to things and people beyond themselves.

One study participant, Norris Bradbury, is a great example. He was the director of the Los Alamos National Laboratory for decades and was tremendously hard-working. It is hard to imagine a higher-pressure job than overseeing the development of the nation's nuclear arsenal at a time of severe Cold War threats. Yet, he was tremendously successful in his long career, and, despite all the stresses and challenges, Bradbury lived a very long, healthy life — to age 88. This was the general pattern. Those who stayed very involved in meaningful careers and worked the hardest, lived the longest.

Friedman's work also revealed some surprising things about divorce and marriage; his research shows that the single strongest social predictor of early death in adulthood is parental divorce during childhood.


The beauty of The Longevity Project is that we don't have to speculate about explanations; we can go back into the lifelong data and see. This tracing of pathways also explains why we are not drawing causal conclusions from correlational data, as some people initially think. It turns out that parental divorce often pushes the child into a number of unhealthy directions, including heavier drinking and smoking, less education, lower career achievements and eventual higher likelihood of divorce themselves. The good news here is that we also discovered pathways to a resilient recovery, such as achieving a sense of personal accomplishment. Strength of character and maturity were important, consistent with other research.

And on the effect of marriage on health and long life:


The big surprise here involved differences between men and women. Magazines are full of advice to "Get married and you will live longer," but it is not true. Marriage was health-promoting primarily for men who were well-suited to marriage and had a good marriage. For the rest, there were all kinds of complications. Women who got divorced or stayed single often thrived. Even women who were widowed often did exceptionally well. It seemed as if women who got rid of their troublesome husbands stayed healthy. Men who got and stayed divorced were at really high risk for premature mortality.

More in this video:

Note that the quote "not by eating vegetables and going to the gym" is not quoting Howard Friedman. Indeed, a key point of The Longevity Project is that the best ways to keep up such healthy behaviors is to get on the right pathway. There is also a Facebook page with lots of comments and links http://on.fb.me/h8NzQS.