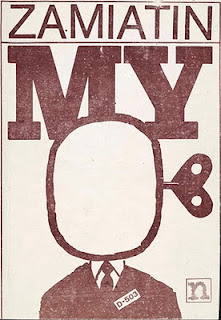 The Russian Zamyatin completed We in 1921, a book that was largely written in response to the Bolshevik Revolution of 1917 and his work in the Tyne shipyards during the First World War. The result was a characteristically unique vision of the future, one that in turn spawned the satirical science fiction dystopia genre.

There's no questioning Zamyatin's influence on 21st Century writers like Aldous Huxley, George Orwell, Kurt Vonnegut and even Ayn Rand. In fact, Orwell himself said that it served as the model for 1984. Like the writers who followed him, Zamyatin took the burgeoning totalitarian and conformative elements of modern industrial society to an extreme conclusion, conveying a surveillance state that considered free will as the cause of unhappiness—and who in turn took it upon itself to control and direct the lives of its citizens.

The novel is set in the future where the protagonist, D-503, lives in the One State, an urban nation constructed almost entirely of glass and which serves as a kind of Benthamite Panopticon; the configuration allows the secret police and spies to inform on and supervise the public more easily. Society is thus portrayed as a kind of prison.

Life in this society is organized to promote maximum productive efficiency along the lines of the system advocated by the hugely influential F.W. Taylor. People march in step with each other and wear identical clothing. Names have been replaced by numbers; men have odd numbers prefixed by consonants while women have even numbers prefixed by vowels. The story itself follows the plight of D-503 as he struggles to reconcile his obligations to the state with his discovery of a nascent revolt called the Mephi.

Like 1984, the dystopian society is presided over by the Benefactor (who Orwell called Big Brother) and every hour "The Table" offers instructions to citizens (a precursor to the telescreen).

Needless to say Zamyatin's book was immediately banned in the Soviet Union. His literary position quickly deteriorated during the 1920s and he eventually fled to Paris in 1931. The novel was first published in English in 1924, but its first publication in the Soviet Union had to wait until 1988, when glasnost resulted in it appearing alongside 1984. A year later We and Brave New World were published together in a combined edition. In 1994, the novel received a Prometheus Award in the "Hall of Fame" category.
Posted by George at 4/02/2011

I haven't heard of this before, and am going to look it up. Do you know if it is out of copyright yet and available at Gutenberg.org? I wonder if I could find it in a used bookstore, too.