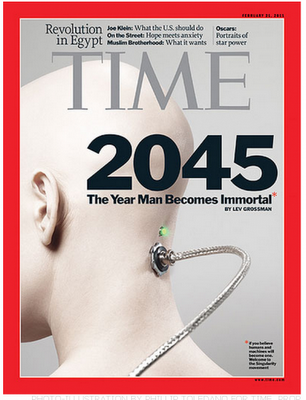 Transhumanism doesn't get more mainstream than this.

So if computers are getting so much faster, so incredibly fast, there might conceivably come a moment when they are capable of something comparable to human intelligence. Artificial intelligence. All that horsepower could be put in the service of emulating whatever it is our brains are doing when they create consciousness — not just doing arithmetic very quickly or composing piano music but also driving cars, writing books, making ethical decisions, appreciating fancy paintings, making witty observations at cocktail parties.

If you can swallow that idea, and Kurzweil and a lot of other very smart people can, then all bets are off. From that point on, there's no reason to think computers would stop getting more powerful. They would keep on developing until they were far more intelligent than we are. Their rate of development would also continue to increase, because they would take over their own development from their slower-thinking human creators. Imagine a computer scientist that was itself a super-intelligent computer. It would work incredibly quickly. It could draw on huge amounts of data effortlessly. It wouldn't even take breaks to play Farmville.

Not all of [the singularitarians] are Kurzweilians, not by a long chalk. There's room inside Singularitarianism for considerable diversity of opinion about what the Singularity means and when and how it will or won't happen. But Singularitarians share a worldview. They think in terms of deep time, they believe in the power of technology to shape history, they have little interest in the conventional wisdom about anything, and they cannot believe you're walking around living your life and watching TV as if the artificial-intelligence revolution were not about to erupt and change absolutely everything. They have no fear of sounding ridiculous; your ordinary citizen's distaste for apparently absurd ideas is just an example of irrational bias, and Singularitarians have no truck with irrationality. When you enter their mind-space you pass through an extreme gradient in worldview, a hard ontological shear that separates Singularitarians from the common run of humanity. Expect turbulence.