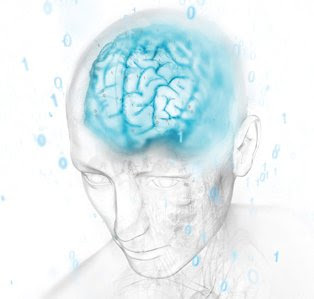 The next giant leap in human evolution may not come from fields like genetic engineering or artificial intelligence, argues SEED's Mark Changizi, but rather from appreciating our ancient brains:


The root of these misconceptions is the radical underappreciation of the design engineered by natural selection into the powers implemented by our bodies and brains, something central to my 2009 book, The Vision Revolution. For example, optical illusions (such as the Hering) are not examples of the brain’s poor hardware design, but, rather, consequences of intricate evolutionary software for generating perceptions that correct for neural latencies in normal circumstances. And our peculiar variety of color vision, with two of our sensory cones having sensitivity to nearly the same part of the spectrum, is not an accidental mutation that merely stuck around, but, rather, appear to function with the signature of hemoglobin physiology in mind, so as to detect the color signals primates display on their faces and rumps.

These and other inborn capabilities we take for granted are not kluges, they’re not “good enough,” and they’re more than merely smart. They’re astronomically brilliant in comparison to anything humans are likely to invent for millennia.

Neuronal recycling exploits this wellspring of potent powers. If one wants to get a human brain to do task Y despite it not having evolved to efficiently carry out task Y, then a key point is not to forcefully twist the brain to do Y. Like all animal brains, human brains are not general-purpose universal learning machines, but, instead, are intricately structured suites of instincts optimized for the environments in which they evolved. To harness our brains, we want to let the brain’s brilliant mechanisms run as intended—i.e., not to be twisted. Rather, the strategy is to twist Y into a shape that the brain does know how to process.

But how do I know this is feasible? This tactic may use the immensely powerful gifts that natural selection gave us, but what if harnessing these powers is currently far beyond us? How do we find the right innate power for any given task? And how are we to know how to adapt that task so as to be just right for the human brain’s inflexible mechanisms?

I don’t want to pretend that answers to these questions are easy—they are not. Nevertheless, there is a very good reason to be optimistic that the next stage of human will come via the form of adaptive harnessing, rather than direct technological enhancement: It has already happened.

Changizi is clearly on to something. Reworking the brain to increase efficiency, boost its powers, and give it novel capacities is a sound idea. But why oh why do so many specialists like Changizi ignore the impact of converging technologies? Adaptive harnessing will most likely be done in concert with other types of cognitive enhancements, including genetic, pharmaceutical, and artificial intelligent applications. And it's not as far off as he'd have us believe.

Remembering lists of items by putting them in an absurd story is an old mnemonic technique. Is that the kind of stuff he is talking about?