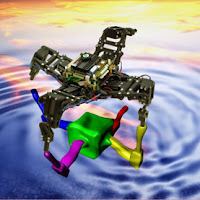 A recent article in Scientific American, Automaton, Know Thyself: Robots Become Self-Aware, points to the work being done by engineers to instill a certain degree of self-awareness in robots, including the capacities for self-image and even a theory of other minds:


Beyond robots that think about what they are thinking, Lipson and his colleagues are also exploring if robots can model what others are thinking, a property that psychologists call "theory of mind". For instance, the team had one robot observe another wheeling about in an erratic spiraling manner toward a light. Over time, the observer could predict the other's movements well enough to know where to lay a "trap" for it on the ground. "It's basically mind reading," Lipson says.

"Our holy grail is to give machines the same kind of self-awareness capabilities that humans have," Lipson says. "This research might also shed new light on the very difficult topic of our self-awareness from a new angle—how it works, why and how it developed."