Study: Interstellar Travel Not Possible Before 2200 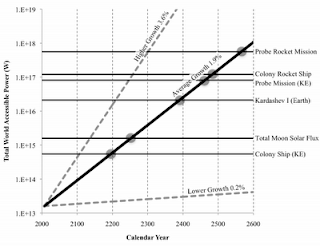 According to a recent paper put out by Marc G. Millis, humanity will not meet the energy requirements for an interstellar trip for at least another two centuries. Millis is the former head of NASA's Breakthrough Propulsion Physics Project and founder of the Tau Zero Foundation which supports the science of interstellar travel.

He bases these calculations on 27 years of historic energy trends, societal priorities, required mission energy, and the implications of the Incessant Obsolescence Postulate (where newer probes pass prior probes).

Millis considers two possible missions: launching a minimal colony ship where destination is irrelevant, and sending a minimal probe to Alpha Centauri with a 75 year mission duration. In the experiment, the colony ship is assumed to have a mass of 10^7 kg, and the probe 10^4 kg.

The first mission is a human generation ship of 500 people on a one-way journey into space. He assumes that such a mission would require 50 tones per human occupant and that each person would use about 1000W, equal to the average amount used by people in the US in 2007. From this, he estimates that the ship would need some 10^18 Joules for rocket propulsion. That compares to a shuttle launch energy of about 10^13 Joules.

The second mission would be a 71 year journey by an unmanned probe headed for Alpha Centauri which is just over 4 light years away. Such a ship would be some three orders of magnitude less massive than a colony ship so it would require considerably less energy.

Problems I have with this paper:

Well, your first two points are valid but people are going to want to go to the stars eventually.

I agree that 500 fleshy humans aboard a ship is fantasy. As concept, that 'ship has sailed'. I think if Humans do spread out into the universe, it'll be digital versions of us, this is far more energy efficient and likely, and certainly if we're talking in the 200-year time frame, then I would think it's far more likely. I'm not saying it's likely at all, I'm just saying it's FAR MORE likely that 500 human bodies boarding a ship, that's all.

We may need some bodies out there somewhere at first. But ultimately, I see our post-human consciousness as really being the thing that eventually populates the whole universe.

If he says 100-200 years using a strictly linear progression, then imagine how close we are if we experience a few positive upticks.

Can't we tap into the power of the sun and potentially move things along much quicker?

George's third point is (it seems to me, and apparently, John) the strongest of the three. 27 years isn't really that much of a baseline, all things considered, and it's really hard to see exactly where materials science and other relevant fields might go. Computational power, however, is already here, and it's already clear at least in principle how to achieve the necessary information processing capabilities to host human-level consciousness in much less unwieldy packages than evolution bequeathed.

I disagree with the proposition that humans won't want to go to the stars (because their friends aren't going, etc.), but I totally agree that *biological* humans aren't going anywhere. Maybe not even very far into the future.

The article ignores technological history. Energy technology advances by revolution, not evolution. I agree that a space probe would get launched around 2050 assuming plausible advances in antimatter technology.

But once we find a way to generate and store kilograms of antimatter, humans will not stop there. Like the atomic bomb it will grow to hundreds of tonnes within a generation.

Governments will have to act quickly to make sure starship construction and fuelling takes place in the outer solar system. A kilogram of antimatter would wipe out a large city if detonated.