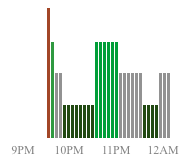 Interesting article about polyphasic sleep over at the Zeology blog. Polyphasic sleep is the practice of sleeping (or napping) multiple times during a 24 hour period instead of getting all required sleep at once (monophasic). Zeology recently discovered a fascinating post on the "Polyphasic Sleep" Google Group and had the author, Oki, produce a guest post: Sleeping ’round the Clock: A Polyphasic Experiment. Of interest to the Zeology blog and qualitative self gurus, Oki used Zeo to transition to a polyphasic sleep pattern and track data.


I'd be curious to know if any of my readers have tried a polyphasic cycle and whether or not it worked for them. My intuition tells me that monophasic sleep, as an evolved sleep mode, is probably best for us, but I'm open to the possibility that it could work.
Posted by George at 11/13/2010

During college in the 1980s, I spent almost a year sleeping polyphasically. I did not employ any formal quantitative measures during that time, but from my subjective perspective I felt more rested, equally alert, and significantly more productive than when I was sleeping monophasically. The only reason I gave up polyphasic sleep was because the requirement to take several naps during the day did not mesh with the corporate culture where I began working after graduation.

I question the assumption that monophasic sleep is an evolved sleep mode. A significant portion of the world's population is at a minimum biphasic (from the siesta of Spain and Latin America to the afternoon naps of India and South Asia). Meanwhile in those cultures that are monphasic (such as the US and Canada), individuals still tend to drift into a period of sleepiness in mid-afternoon. A growing number of doctors and sleep researchers have begun collecting evidence of the positive physical and psychological benefits of napping. (For example, a 2007 Harvard study found that adults who nap regularly are significantly less likely to die of heart disease.) When all of this this is considered together, it hints at the possibility that humans are hardwired to sleep at least twice during every 24-hour period.

In my case, I considered polyphasic sleep a success and given the appropriate opportunity, I'd gladly return to that sleep schedule.

I've seen lots of blogs by people who've tried polyphasic sleep. They all talk about how great it is and then quietly drop it a few weeks later.

I tried polypahsic sleep once. I didn't like it.
First, it is very difficult to adapt to it. For about a week I was dead tired, then for about a week I was o.k. and felt fairly good after my naps. Then I would accidentally sleep in once or twice and I would be back to square one; dying from tiredness, falling asleep in my classes etc. So it's tough.

But that's not all. If it were only difficult maybe I could've stuck to it. But if you're sleeping once every 4 hours you are constantly watching the time, waiting for and calculating your next sleep time (this too is a huge minus. Who wants to have an OCD about the time?) I felt as though I could never accomplish anything, in spite of actually having more hours in a day.

Let's say I spent an hour reading news sites. Suddenly I only have ~2.75 hours till sleep , which will interrupt anything I'm doing.
Maybe it's just me but I almost always work for for longer than 2 hours.
If you like constantly fragmenting your work, increasing the chances you'll be distracted, yet again, when restarting, maybe it's for you. Not I.

Plus it'll ruin your social and business life.

So stick with monophasic sleep. Or better yet do some biphasic with a nap in the afternoon.

I practiced polyphasic sleep for about a year in the early 1990s
without the use of over-the-counter stimulants or hypnotics. I found
the experience stupefying--and unsatisfactory. I suffered mental
effects similar to those of chronic mild sleep deficit. I recall no
adverse physical side effects. I suffered no social disadvantages from
the odd schedule. I had very limited exposure to sunlight during the
period.

I remember a profound change in my sense of time's shape with polyphasic sleep. Days stretched into a single long period. The regular rhythmic day-to-night circle vanished, no longer rewound by a night's sleep, but instead merely punctuated by the naps. That impression persists still, only weaker.

I can't say as I've ever intentionally tried polyphasic sleep, but those times in my life when I've not had an externally-imposed schedule I have always drifted that way. What I've found is that I tend to be more productive and more consistently alert, though if I woke during twilight I sometimes experienced fairly acute anxiety as to whether I'd slept for just an hour or all the way through to morning (which I don't like doing). That said, I've always been a heavy sleeper and a person who could sleep at any time if I tried. My wife, on the other hand, is extremely cyclical and prone to insomnia. If her schedule is disrupted or constricted, she may not be able to sleep at all.

I've been doing a biphasic sleep schedule since June. I sleep seven hours at night, wake for an hour, and then sleep one last hour on a train. I haven't experienced any major effects, but breaking my sleep schedule (for a flight/party/whatever) does not bother me as much as it used to.