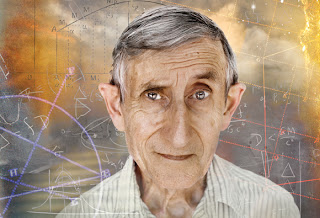 Kenneth Brower of The Atlantic has penned a piece about the life and work of physicist Freeman Dyson, "The Danger of Cosmic Genius."


In the range of his genius, Freeman Dyson is heir to Einstein—a visionary who has reshaped thinking in fields from math to astrophysics to medicine, and who has conceived nuclear-propelled spaceships designed to transport human colonists to distant planets. And yet on the matter of global warming he is, as an outspoken skeptic, dead wrong: wrong on the facts, wrong on the science. How could someone as smart as Dyson be so dumb about the environment? The answer lies in his almost religious faith in the power of man and science to bring nature to heel.

Brower comes down hard on Dyson, particularly for what he sees as his misplaced faith in science and technology:


“Environmentalism has replaced socialism as the leading secular religion,” Dyson complains in his 2008 New York Review of Books essay on global warming. This is far too gloomy an assessment. The secular sect on the rise at the moment is Dyson’s own. A 2009 Pew poll found that only 57 percent of Americans believe there is solid evidence that the world is getting warmer, down 20 points from three years before. In response to climate change, we have seen a proliferation of proposals for geo-engineering solutions that are Dysonesque in scale and improbability: a plan to sow the oceans with iron to trigger plankton blooms, which would absorb carbon dioxide, die, and settle to the sea floor. A plan to send a trillion mirrors into orbit to deflect incoming sunlight. A plan to launch a fleet of robotic ships to whip up sea spray and whiten the clouds. A plan to mimic the planet-cooling sulfur-dioxide miasmas of explosive volcanoes, either by an artillery barrage of sulfur-dioxide aerosol rounds fired into the stratosphere or by high-altitude blimps hauling up 18-mile hoses.

None of these projects will happen, fortunately. They promise side effects, backfirings, and unintended consequences on a scale unknown in history, and we lack the financial and political wherewithal, and the international comity, to accomplish them anyway. What is disquieting is not their likelihood, but what they reveal about the persistence of belief in the technological fix. The notion that science will save us is the chimera that allows the present generation to consume all the resources it wants, as if no generations will follow. It is the sedative that allows civilization to march so steadfastly toward environmental catastrophe. It forestalls the real solution, which will be in the hard, nontechnical work of changing human behavior.

What the secular faith of Dysonism offers is, first, a hypertrophied version of the technological fix, and second, the fantasy that, should the fix fail, we have someplace else to go.