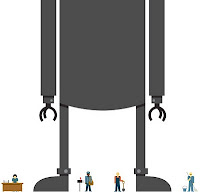 We are still a decade or two away from the next industrial revolution—one that will brought on by advances in molecular manufacturing, sophisticated AI and advanced robotics—but the early signs are already starting to be felt. According to GOOD magazine, the middle class is disappearing on account of increasing automation. The article quotes MIT economist David Autor who argues that:


...a leading explanation for the disappearance of the middle class is "ongoing automation and off-shoring of middle-skilled 'routine' tasks that were formerly performed primarily by workers with moderate education (a high school diploma but less than a four-year college degree)." Routine tasks, he explains, are ones that "can be carried out successfully by either a computer executing a program or, alternatively, by a comparatively less-educated worker in a developing country."

The culprit, in other words, is technology. The hard truth-and you don't see it addressed in news reports-is that the middle class is disappearing in large part because technology is rendering middle-class skills obsolete.

People say America doesn't make anything anymore, but that's not true. With the exception of a few short lapses, manufacturing output has been on the rise since the 1980s. What is true is that industrial robots have been carrying ever more of the manufacturing burden on their steely shoulders since they appeared in the 1950s. Today, a Japanese company called Fanuc, Ltd., has industrial robots making other industrial robots in a "lights out" factory. (That's the somewhat unsettling term for a fully automated production facility where you don't need lights because you don't need humans.) That's where we're headed.

It's not just manufacturing, either. Automated call centers are replacing customer-service agents. Automated checkout stations are replacing grocery-store clerks. When the science of computer vision advances sufficiently, we'll have algorithms, not humans, evaluating X-rays at airport security checkpoints and screening user-generated content for sites like Facebook.

Already about a decade ago I developed software doing certain "middle-skilled 'routine' tasks that" (would) have been "performed primarily by workers with moderate education". Those workers -- I knew a lot them personally -- were usually members of the lower middle class in my country. I did the development for a former employer, a big, international company.

So, if business replaces human workers with robots, who will buy the goods they produce?

Everyone will either be a scientist/artist or on welfare. And there will be a 3-d printer in every home.

If something would be more profitable by automation, it will be automated:
http://www.youtube.com/watch?v=8G59zTXVHHU&feature=related

It may be interesting, that in the case I mentioned above, no goods, in the traditional sense, were produced, but a service was made available to clients.

The potential employees, who were not employed because of my software, did not know about it. Half a decade later, after the software has been closed down, those employees, who then had to offer the service, did not like it, because it is partly a rather stupid and stressful kind of work. No scientists or artists at work here ;-)

This is a case, where management, because of incompetence, has not been able to automate a process, which has already been proven to be profitably automatable to a degree of, say, 80 percent.