Revisiting the proto-transhumanists: Diderot and Condorcet

Many of the ideas characteristic of the movement have already been bantered about for literally hundreds of years—whether it be such things as radical life extension or the construction of machine minds. The Enlightenment period in particular was a fruitful time for these ideas to take flight, mostly on account of the new sciences, the rise of rationalism and secular humanism, and the waning influence of religion. Two thinkers that best exemplified Enlightenment-era proto-transhumanism were Denis Diderot and Marquis de Condorcet, and their early contributions are worth revisiting. 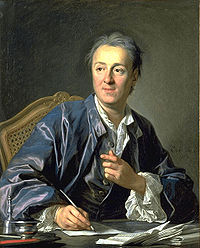 Denis Diderot (1713-1784) was a French philosopher, art critic, and writer. He is probably best known for being the chief editor and contributor to the Encyclopedie, the world's first comprehensive and publically accessible encyclopaedia. But his legacy extends much further than this.

Early in his career he speculated about the connection between reason and the senses, and thought that the blind might be able to read through their sense of touch; he is thus considered a forefather of the Braile system.

In the same book, "Letter on the Blind," Diderot also rejected a number of religious tenants about nature and the place of man, and quite surprisingly, presented a very early and undeveloped concept about variation and natural selection. Specifically, he argued that organisms were the product of self-generation (what we today would call autonomous processes), and that these animals could change over time—and all without Creation and supernatural intervention.

Just as shockingly in terms of insight, he put forward the notion of "thinking matter." He was a materialist in the truest sense, and argued that cognition and consciousness arise from the material realm. Diderot flatly denied the existence of the soul. Needless to say, his ideas got him into serious trouble with the state and he was subsequently imprisoned for some months, often visited by his friend, none other than Jean Jacque Rousseau.

Many years later he wrote "D'Alembert's Dream" in which he once again speculated about the ultimate constitution of matter and the meaning of life. In this book he maintained a completely materialistic view of the universe and argued that human behavior was hereditary. It was here where he introduced his theory on life and nature, indicating that matter is not fixed but instead subject to evolution. Each species in existence transforms itself and gives birth to a new species.

Diderot also believed that the human species was not immune to this kind of evolution and contended that humanity might end up a society of free individuals just as easily as it could regress to a "single animal." In this sense he was no blind advocate of progress, and warned of potentially Borg-like dystopian futures. He wrote that humanity might eventually be able to redesign itself into a great variety of types “whose future and final organic structure it’s impossible to predict.” In Diderot’s dialogues, d’Alembert muses that human beings could devolve into “large, inert, and immobile sediment.” In other words we could, through accident or intention, lose faculties we value, such as our capacities for empathy, creativity, awe or reflection. Subsequently, argued Diderot, we need guidelines and policies to steer human evolution away from the dead ends of selfishness and addictive absorption, and towards greater sociability, self-awareness and reason.

And consistent with his materialism, Diderot also argued that consciousness was a product of brain matter. Consequently, he believed that the conscious mind could be deconstructed and put back together. He felt that science would eventually find a way to bring the dead back to life and redesign animals and machines into intelligent creatures.

Truly a man ahead of his time. 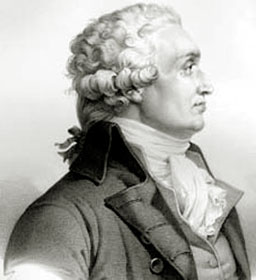 Marquis de Condorcet (1744-1794) was a hugely influential Enlightenment era thinker who contributed significantly to the rise of secular humanism and helped plant the seeds of transhumanism. He is said to have best represented the ideals of the Enlightenment.

To this end, Condorcet advocated for a liberal economy, free and equal public education, and constitutionalism. He also advocated for the primacy of reason as way to liberate humanity from the church, authoritarianism, and nature.

He was a brilliant mathematician and political scientist; he forged the two disciplines together and became the first person in history to effectively use mathematical principles to study social science.

Condorcet speculated about utopian possibilities and wrote a piece on the perfectability of society. He gave no concrete definition of a "perfect" human existence, but he believed that the progression of the human race would inevitably continue throughout the course of its existence. His thoughts prompted Thomas Malthus to write his famous paper on unsustainable population growth.

His most influential work from a transhumanist perspective was his book, "Sketch for a Historical Picture of the Progress of the Human Mind", which he wrote when he was in hiding after the French Revolution and subsequently published posthumously.

In this book he argued that reason and science can and should be applied to better develop humanity's intellectual and moral faculties. He thought that all facets of nature should be re-evaluated and conformed to the needs of human intelligence. He wrote,

The time will therefore come when the sun will shine only on free men who know no other master but their reason; when tyrants and slaves, priests and their stupid or hypocritical instruments will exist only in works of history and on the stage; and when we shall think of them only to pity their victims and their dupes; to maintain ourselves in a state of vigilance by thinking on their excesses; and to learn how to recognize and so to destroy, by force of reason, the first seeds of tyranny and superstition, should they ever dare to reappear among us.

He pin-pointed a number of factors that he believed were responsible for the various inequalities and injustice that inflicted humans—a list that included disparities in wealth, status, education, and of interest to transhumanists—length of life.

Indeed, Condorcet was an early advocate of life extension and saw no reason why it shouldn't be a part of humanity's inexorable path towards perfectability.

The real advantages that should result from this progress, of which we can entertain a hope that is almost a certainty, can have no other term than that of the absolute perfection of the human race; since, as the various kinds of equality come to work in its favor by producing ampler sources of supply, more extensive education, more complete liberty, so equality will be more real and will embrace everything which is really of importance for the happiness of human beings...

The Enlightenment era was truly a remarkable time and we're still coming to grips with its legacy. Consequently, it's important for many transhumanists to note that we are in fact standing on the shoulders of giants.
Posted by George at 11/04/2010