The Forgotten Radicalism of the European Enlightenment [book] 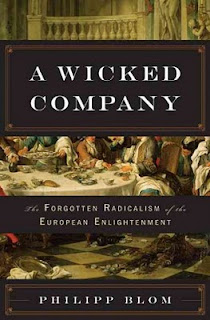 A new book by Philipp Blom investigates the forgotten radicalism of the Enlightenment period and, among other things, reaffirms the importance of proto-transhumanist Denis Diderot. The book, titled "A Wicked Company", describes how today's New Atheism is a bit of a johnny-come-lately; philosophers of the Enlightenment regularly met together to deny the existence of God and the soul. Moreover, these Paris Salons were a way for them to express their unconventional views on society and the human condition. From the Economist's review:


Not only was their thinking radical, but expressing it was dangerous. Diderot was imprisoned for his writings, an experience, Mr Blom argues, that left him too scared to lay out his philosophy plainly, instead disguising it within numerous plays, novels and letters. Baron d’Holbach published most of his works under pseudonyms, which helped to keep him safe but also condemned him to centuries of philosophical obscurity (except in the officially godless Soviet Union). Even when the French revolution finally came, its self-appointed guardians had no place for the philosophy of the true radicals. For Maximilien Robespierre, chief architect of the reign of terror that followed the revolution, God and religion were far too useful in keeping the population in line.

Blom also goes on to describe how many Enlightenment thinkers have been given short shrift over the years. His book aims to correct that oversight:


Even today, and even in secular western Europe, the bald and confident atheism and materialism of Diderot and Holbach seems mildly shocking. We still cling stubbornly to the idea of an animating soul, a spiritual ghost in the biological machine. For Mr Blom, the modern, supposedly secular world has merely dressed up the “perverse” morality of Christianity in new and better camouflaged ways. We still hate our bodies, he says, still venerate suffering and distrust pleasure.

This is the message of Mr Blom’s book, hinted at but left unstated until the closing chapters. He believes the Enlightenment is incomplete, betrayed by its self-appointed guardians. Despite all the scientific advances of the past two centuries, magical thinking and the cultural inheritance of Christianity remain endemic.

Wow, some shockingly apt observations by Mr. Blum. The Enlightenment is indeed incomplete, but we transhumanists are working to correct that.
Posted by George at 11/04/2010

Yeah, my old professor of philosophy at university -- he died in 1994 -- even said the Enlightenment failed.

We should not fight old battles again. Nowadays the situation with the Christian religion is still annoying, but in a different way and to a different extent.