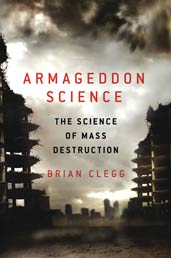 Physicist Brian Clegg, author of "Armageddon Science: The Science of Mass Destruction", was recently interviewed by Salon. Among the various threats to humanity discussed—a list that includes nuclear weapons, global warming, particle accelerators, nanobots, and apparently autistics—Clegg also discusses the possibility of a technological singularity. But like so many other so-called experts, he gets this one completely wrong. Fair warning, as this next quote is full of fail:


The Singularity came from the ideas of science-fiction writer Vernor Vinge. It's like the Borg in "Star Trek": something that is a combination of living creature and machine. Followers of the Singularity believe the machine will become more and more intelligent, and that this new creature will be the next step. Homo sapiens will either be subjugated or wiped out.

Frankly, I think the time scales are unrealistic. There is no doubt that technology is going to be used to enhance human beings. We've been doing this for a long time. You could say that the dog enhanced human ability; we created dogs from the wolf and used them for our benefit. In the modern sense, we use technology inside our bodies. But technology always jumps in a different direction than you might expect. The people who talk about the Singularity look at computer technology and medical technology that puts stuff in our bodies and assume the technology will continue to progress in the exact same direction. I think we're much more likely to end up with technology that interacts with us rather than becoming a part of us.

The Singularity is a rather crude idea, and the 2040 prediction is ridiculous, especially if you look at how little cybertechnology has actually developed. Ray Kurzeil has this idea of wanting to live forever, and hoped to keep himself going until the technology developed, so the Singularity is a kind of wish fulfillment. Most of the scientific community, frankly, views him as an eccentric. He gives himself blood transfusions and eats vast numbers of supplements every day, and these are things that actually have very little scientific basis for prolonging life. The Singularity is popular because everyone wants to live forever. It's a very appealing idea.

Once again the cult of Ray Kurzweil is invoked, and as is frustratingly typical of these outside commentaries, transhumanism is conflated with the singularity (not to mention the use of ad hominen to dismiss Ray's predictions). Nowhere in this analysis does Clegg discuss the potential for a runaway superintelligence or an "intelligence explosion" outside of human enhancement. So needless to say, his assessment of the singularity risk is grossly understated.
Posted by George at 11/09/2010

How is it that autistics are to blame?