Jeff McMahan on eliminating carnivorism in the natural world 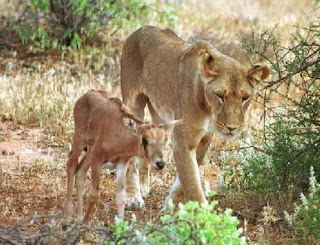 This is one of the most important and thought-provoking articles I've read in the New York Times in quite some time: The Meat Eaters by Rutgers philosopher Jeff McMahan.

In the article, McMahan asks the question, "Would the controlled extinction of carnivorous species be a good thing?" His conclusion is yes:


The conflict, therefore, must be between preventing suffering and respecting the alleged sacredness — or, as I would phrase it, the impersonal value — of carnivorous species. Again, the claim that suffering is bad for those who experience it and thus ought in general to be prevented when possible cannot be seriously doubted. Yet the idea that individual animal species have value in themselves is less obvious. What, after all, are species? According to Darwin, they “are merely artificial combinations made for convenience.” They are collections of individuals distinguished by biologists that shade into one another over time and sometimes blur together even among contemporaneous individuals, as in the case of ring species. There are no universally agreed criteria for their individuation. In practice, the most commonly invoked criterion is the capacity for interbreeding, yet this is well known to be imperfect and to entail intransitivities of classification when applied to ring species. Nor has it ever been satisfactorily explained why a special sort of value should inhere in a collection of individuals simply by virtue of their ability to produce fertile offspring. If it is good, as I think it is, that animal life should continue, then it is instrumentally good that some animals can breed with one another. But I can see no reason to suppose that donkeys, as a group, have a special impersonal value that mules lack.

Even if animal species did have impersonal value, it would not follow that they were irreplaceable. Since animals first appeared on earth, an indefinite number of species have become extinct while an indefinite number of new species have arisen. If the appearance of new species cannot make up for the extinction of others, and if the earth could not simultaneously sustain all the species that have ever existed, it seems that it would have been better if the earliest species had never become extinct, with the consequence that the later ones would never have existed. But few of us, with our high regard for our own species, are likely to embrace that implication.

Here, then, is where matters stand thus far. It would be good to prevent the vast suffering and countless violent deaths caused by predation. There is therefore one reason to think that it would be instrumentally good if predatory animal species were to become extinct and be replaced by new herbivorous species, provided that this could occur without ecological upheaval involving more harm than would be prevented by the end of predation. The claim that existing animal species are sacred or irreplaceable is subverted by the moral irrelevance of the criteria for individuating animal species. I am therefore inclined to embrace the heretical conclusion that we have reason to desire the extinction of all carnivorous species, and I await the usual fate of heretics when this article is opened to comment.

It's worth noting that McMahan, like a number of abolitionist transhumanists, have advocated something like this for quite some time now—a group of thinkers that includes myself, David Pearce, Pablo Stafforini, Michael Anissimov and others. David Pearce's contribution to the discussion is the most significant, and it would have been nice to have seen McMahan make mention of it.

As for me, I've argued for something even more extreme and sweeping than selective extinction or the reprogramming of predators; I've made the case that we are morally obligated to uplift the entire animal kingdom so that they may join posthumanity in postbiological existence.

With McMahan's contribution hitting the mainstream, however, I am excited beyond words. The meme is out there; now let's see where we take it.
Posted by George at 10/25/2010

Look, sapience is always at risk of wiping itself out, an ecosystem without carnivores would require intelligent oversight to prevent collapse. Do you really want to risk dragging down all known life with us?

Just wondering, if the goal is to extinguish and prevent all suffering, why is reprogramming "prey" species not also an option? For example, such that they don't experience terror, pain, and agony when they are the targets of predators?

The level of both Bourgeois Delusion and Anthropocentric Arrogance embodied in this is stunning and the level of Death Wish amazing. You want to 'up-lift' animals and reprogram carnivores to become 'nice'? When we cannot do anything even vaguely like that with our own species and nor stop utterly wrecking the environment at the same time?

This would be laughable if were not so psycho-culturally obscene. Your pet projects – AI, animal up-lift, de-gendered humans, mind up load – would create a world were a race of Uber Eloi are both pawns and prey in a battle between Skynet and the Kzinti while you and Anissimov 'tut-tut the savagery' from your brain cases orbiting out in the Kuiper Belt.

At least I'm honest with myself, all I want to do is live forever.

Besides, suffering is good, it teaches perspective. If everyone was required to spend a week living as a paleolithic hunter-gatherer (a simulation might work as long as pain can be felt) it would solve a lot of social problems.

On the other hand, this whole idea sounds like a fascinating experiment in evolution. Once we remove existing carnivores, it will be interesting to see which one's change first to fill the open niches. Two words: predatory squirrels.

Also -- great to see philosophical stuff like this in the NY Times. That's why I love it.

Stopping suffering by doing to certain living beings one of the greatest sufferings: extinction, even mass extinction?

And, regarding this: "I await the usual fate of heretics ..." Isn't Jeff McMahan's self-pity disgustful?