Breasts and the future of regenerative medicine 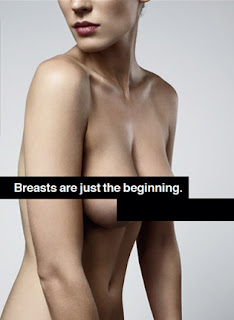 Wired has published an article about the seminal work being done by Chris Calhoun in the burgeoning biotechnological field of tissue engineering. Calhoun and his team are using stem cells—specifically stem-cell-enriched adipose (fat) tissue—to enhance, heal, and rebuild injured or damaged organs. Interestingly, it is through their work on reconstructing breasts damaged by cancer and mastectomies that they were able to make their breakthrough.

And just as profoundly, it is yet another example of how a therapeutic intervention can also be used for cosmetic or enhancement purposes.

"It’s the first practical cell therapy," says Calhoun "And it’s breasts." Which means cancer victims with breasts mutilated by surgery—as well as women who are simply unhappy with their natural assets—can now grow a new and improved pair, with raw materials harvested from their own body fat.

Yet that's only part of the story; there is massive potential here for a revolution in regenerative medicine and in the ways in which it can be used and delivered:


But breast augmentation is just one development (so to speak) in the company’s more ambitious plan: to introduce stem cell medicine to the mass market—and not using the ethically fraught kind of stem cells from human embryos. Instead, based on almost a decade of trials that Cytori and its academic partners have performed on cell cultures, lab rodents, and now humans, they believe their engineered flab cells can treat more organs than you find in a French butcher shop. Chronic heart disease? Check: In human studies released in May, the cells improved patients’ aerobic capacity and shrank the size of the infarct (tissue killed by lack of blood). Heart attack? Check: A human clinical trial, also reported in May, found that the cells increased both the blood supply to damaged heart muscle and the volume of blood that the heart pumped. Kidney injury as a result of cancer therapy? Check: In recent rat studies, the cells improved kidney function. Incontinence after prostatectomy? Check: Another recent study reported that, by 12 weeks after injection, the cells had decreased the amount of urine male volunteers were leaking by 89 percent. If Calhoun and his scientists succeed, they won’t just create more cleavage. They’ll make practical a whole new field, one that medical visionaries have dreamed of for decades: regenerative medicine.

Imagine self augmenting breast that pump up or deflate based on the user or customers desire...

I can see a stripper now asking
"what size tits are you into sweety?"

Can I get a D cup please?

"Sure,, thought controlled inflation... sssssstttttpp Ding! they are ready"