Economist: Lifespan extending benefits of caloric restriction passed down to next generation. Seriously. 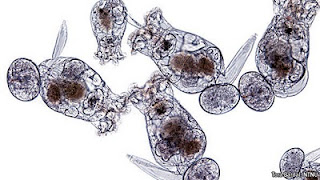 The Economist is reporting on how an obscure group of animals, the rotifer, may reveal the secret of elongating life. It's a study into caloric restriction, which is not surprising, but what's particularly fascinating about this study, however, is that the benefits seem to be passed down to the next generation:


Rotifers are unusual in that they often reproduce by parthenogenesis (some species, indeed, can reproduce only in this way). A parthenogenetic population is, by definition, all female and the result, give or take the odd mutation, is that a rotifer’s daughters are genetically identical to her. That makes rotifers convenient subjects for studies of the controversial idea that characteristics acquired during an individual’s life can be passed down the generations in ways that are independent of mutations in the DNA.

Dr Watabe and his colleagues first looked at whether caloric restriction does, indeed, work its magic on rotifers. It does. Without it, as they report in Functional Ecology, their animals lived for an average of 8.8 days. With it they lived for 13.5 days. The intriguing result came when they did the same thing with the rotifers’ offspring. The daughters of those rotifers which had been fed as much as they could eat lived for 9.5 days if treated likewise (not significantly different from their mothers) and 14.4 if put on short commons. Those born of calorie-restricted mothers lived for 12.7 and 16.8 days respectively. Something, then, is being passed on that is having an effect down the generations.

That something seems to be related to an enzyme called catalase. This enzyme degrades hydrogen peroxide, a highly reactive chemical that creates cellular damage of the sort associated with ageing. Dr Watabe found that the offspring of calorie-restricted mothers have more catalase than those of mothers who were fed without restriction.

So, if inherited epigenetic changes are causing daughter rotifers to produce more catalase, it raises the question of whether a similar thing happens in other species and, if so, whether it might be induced artificially so that people won't have to resort to caloric restriction.

Caloric restriction is interesting but I am more concerned about AI and its shared use.

I don’t think that AI is an existential risk. It is going to be more of a golden opportunity. For some probably not for all.

Given that most people oppose AI on various basis (religious, economic) chances are it will be implemented in a small group, and very few people will get to benefit from it. Wealthy people would probably be the first to use it.

This isn’t a regular technology and it will not go first to the rich and then to everybody else, like it happened with the phones or computers in a couple of decades. This is where Kurzweil is wrong.

Can someone imagine the dynamics of a group that has access to AI for 20-30 years?

I doubt that after 20 or 30 years, heck even after 10 years, they would need any money so the assumption that it will be shared with the rest of the world for financial reasons doesn’t seem founded.

So I am trying to save and figure what would be the cost of entry in this club.