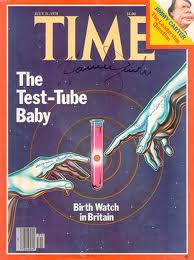 Ronald Bailey tells us what this year's Nobel Prize for a test tube baby pioneer tells us about the moral endorsement of technology:


At long last, in vitro fertilization pioneer Robert Edwards has been awarded a Nobel Prize. Back in 1978, his research with his colleague Patrick Steptoe led to the birth of the world’s first test tube baby, Louise Joy Brown. The public (and makers of public policy) initially reacted to Edwards’ research with moral horror. However, once he and Steptoe had succeeded in producing a healthy baby girl, revulsion swiftly turned into wide approval and ethical acceptance.

In 2001, when Roberts was given the prestigious Lasker Award for medical research, biochemist Joseph Goldstein quipped, "We know that IVF was a great leap because Edwards and Steptoe were immediately attacked by an unlikely trinity—the press, the pope, and prominent Nobel laureates." Edwards’ scientific career traces out the ethical arc that characterizes reaction to much technological progress during the last century—initial fear and loathing followed by a warm embrace. Yuck followed quickly by yippee.

In 1969, a Harris poll found that a majority of Americans believed that producing test-tube babies was "against God's will." In 1970s, the federal government imposed a moratorium on federal funding of in vitro fertilization research and legislation that would have outlawed IVF was considered by Congress. Yet just one month after the birth of Louise Brown, the Gallup poll reported that 60 percent of Americans approved of in vitro fertilization and more than half would consider using it if they were infertile.

Advances in biomedicine—especially those that touch most closely on birth and death—have been the most ethically fraught. A lot of moral struggles have centered on control over reproduction. Let’s set aside the long fight over abortion and look chiefly at a couple of the other moral struggles over fertility control, contraception and artificial insemination, as examples of this process of progressive moral endorsement.

"... attacked by an unlikely trinity—the press, the pope, and prominent Nobel laureates."

Well, let's make a sweeping blow ;-). Most press people are flat out incompetent regarding everything. The pope believes he is the representative of an all powerful entity who has created the entire universe -- come on. Nobel laureates produce as much sense and nonsense as everybody else outside of their profession, and moral is outside of the profession of all Nobel laureates.