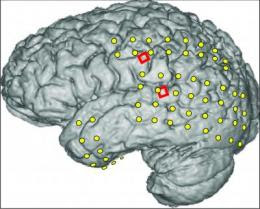 University of Utah scientists have successfully decoded words from brain signals, bringing us one step closer to realizing technologically assisted telepathy, or techlepathy.

In an early step toward letting severely paralyzed people speak with their thoughts, researchers translated brain signals into words using two grids of 16 microelectrodes implanted beneath the skull but atop the brain:

Using the experimental microelectrodes, the scientists recorded brain signals as the patient repeatedly read each of 10 words that might be useful to a paralyzed person: yes, no, hot, cold, hungry, thirsty, hello, goodbye, more and less.

Later, they tried figuring out which brain signals represented each of the 10 words. When they compared any two brain signals - such as those generated when the man said the words "yes" and "no" - they were able to distinguish brain signals for each word 76 percent to 90 percent of the time.

When they examined all 10 brain signal patterns at once, they were able to pick out the correct word any one signal represented only 28 percent to 48 percent of the time - better than chance (which would have been 10 percent) but not good enough for a device to translate a paralyzed person's thoughts into words spoken by a computer.

The researchers discovered that each spoken word produced varying brain signals, and thus the pattern of electrodes that most accurately identified each word varied from word to word. This finding supports the theory that closely spaced microelectrodes can capture signals from single, column-shaped processing units of neurons in the brain.

All this said, the process is far from perfect. The researchers were 85% accurate when distinguishing brain signals for one word from those for another when they used signals recorded from the facial motor cortex. They were 76% accurate when using signals from Wernicke's area (and combining data didn't help). The scientists were able to record 90% accuracy when they selected the five microelectrodes on each 16-electrode grid that were most accurate in decoding brain signals from the facial motor cortex. But in the more difficult test of distinguishing brain signals for one word from signals for the other nine words, the researchers initially were accurate only 28% of the time. However, when they focused on signals from the five most accurate electrodes, they identified the correct word 48% of the time.

So, there's lots of work to be done, but the proof of concept appears to be (mostly) there.

This research is being done to help those with locked-in syndrome, but once it gets developed there will be broader implications and applications. A more sophisticated and refined version of this technology, and in conjunction with other neural interfacing technologies, could result in the development of technologically assisted telepathy.
Posted by George at 9/19/2010

Now you need a visual implant to receive messages, like maybe those used in cybernetic "eyes" (or rather sunglasses), and you'll be able to send texts without touching anything. Combine it with Jorgensen's auditory implant and you'll have a complete cell phone in your head.

Hold on, I thought that BCIs that allowed you to type without moving already existed, Emotiv for one: http://www.emotiv.com/

This new advancement in medical technology can help patients with memory problems.It's a personal choice but in the bible it is considered a spiritual sin.