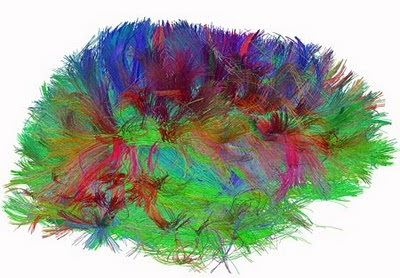 The National Institutes of Health recently awarded grants totaling $40 million to map the human brain's connections in high resolution. It's hoped that better understanding of such connectivity will result in improved diagnosis and treatment of brain disorders.

To do so, state-of-the-art scanners will be employed to reveal the brain's intricate circuitry in high resolution.

"We're planning a concerted attack on one of the great scientific challenges of the 21st Century," said Washington University's Dr. David Van Essen, Ph.D., who co-leads one of the groups with Minnesota's Kamil Ugurbil, Ph.D. "The Human Connectome Project will have transformative impact, paving the way toward a detailed understanding of how our brain circuitry changes as we age and how it differs in psychiatric and neurologic illness."

The Connectome projects are being funded by 16 components of NIH under its Blueprint for Neuroscience Research.

This highly coordinated effort will use state-of-the-art imaging instruments, analysis tools and informatics technologies — and all of the resulting data will be freely shared with the research community. Individual variability in brain connections underlies the diversity of human cognition, perception and motor skills, so understanding these networks promises advances in brain health.

One of the teams will map the connectomes in each of 1,200 healthy adults — twin pairs and their siblings from 300 families. The maps will show the anatomical and functional connections between parts of the brain for each individual, and will be related to behavioral test data. Comparing the connectomes and genetic data of genetically identical twins with fraternal twins will reveal the relative contributions of genes and environment in shaping brain circuitry and pinpoint relevant genetic variation. The maps will also shed light on how brain networks are organized.

In tooling up for the screening, the researchers will optimize magnetic resonance imaging (MRI) scanners to capture the brain’s anatomical wiring and its activity, both when participants are at rest and when challenged by tasks. All participants will undergo such structural and functional scans at Washington University. For these, researchers will use a customized MRI scanner with a magnetic field of 3 Tesla. This Connectome Scanner will incorporate new imaging approaches developed by consortium scientists at Minnesota and Advanced MRI Technologies and will provide ten-fold faster imaging times and better spatial resolution.

Creating these maps requires sophisticated statistical and visual informatics approaches; understanding the similarities and differences in these maps among sub-populations will improve our understanding of human brain in health and disease.