NASA's warnings on the dangers of severe space storms 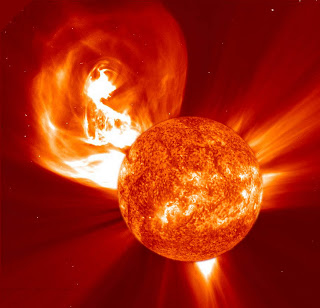 Back in June I blogged about the potential dangers arising from space storms that could spawn devastating solar flares. This is no joke, nor is it part of the laughable (but conveniently co-incidental) 2012 doomsday nonsense. There's actual science involved here; NASA issued a solar storm warning back in 2006 in which it predicted that the worst of it could come sometime between 2011 and 2012. Last year they slightly downgraded their warning, while extending their forecast to 2013—May 2013 to be exact, which sounds eerily specific.

According to NASA, we are currently in a solar maximum period. These cycles are capable of creating space storms—what are known as "Carrington Events," named after astronomer Richard Carrington who witnessed a particularly nasty solar flare back in 1859. The flare he documented resulted in electrified transmission cables, fires in telegraph offices, and Northern Lights so bright that people could read newspapers by their red and green glow...in Mexico.

If this is what happened in 1859, imagine what would happen today. Well, we're starting to have some idea—and the news is pretty bad.

A recent report by the National Academy of Sciences found that if a similar storm occurred today, it could cause $1 to 2 trillion in damages to society's high-tech infrastructure and require four to ten years for complete recovery. It could damage everything from emergency services’ systems, hospital equipment, banking systems and air traffic control devices, through to everyday items such as home computers, iPods and GPS's. Because of our heavy reliance on electronic devices, which are sensitive to magnetic energy, the storm could leave a multi-billion dollar damage bill and cataclysmic-scale problems for governments.

Worse than this, however, would be the potential length of blackouts. According to a Metatech Corporation study, an event like the 1921 geomagnetic storm would result in large-scale blackouts affecting more than 130 million people and would expose more than 350 transformers to the risk of permanent damage. It could take months—if not years—to put everybody back on the grid.

Modern society depends heavily on a variety of technologies that are susceptible to the extremes of space weather—severe disturbances of the upper atmosphere and of the near-Earth space environment that are driven by the magnetic activity of the Sun. Strong auroral currents can disrupt and damage modern electric power grids and may contribute to the corrosion of oil and gas pipelines. Magnetic storm-driven ionospheric density disturbances interfere with high-frequency (HF) radio communications and navigation signals from Global Positioning System (GPS) satellites, while polar cap absorption (PCA) events can degrade—and, during severe events, completely black out—HF communications along transpolar aviation routes, requiring aircraft flying these routes to be diverted to lower latitudes. Exposure of spacecraft to energetic particles during solar energetic particle events and radiation belt enhancements can cause temporary operational anomalies, damage critical electronics, degrade solar arrays, and blind optical systems such as imagers and star trackers.

The effects of space weather on modern technological systems are well documented in both the technical literature and popular accounts. Most often cited perhaps is the collapse within 90 seconds of northeastern Canada’s Hydro-Quebec power grid during the great geomagnetic storm of March 1989, which left millions of people without electricity for up to 9 hours. This event exemplifies the dramatic impact that extreme space weather can have on a technology upon which modern society in all of its manifold and interconnected activities and functions critically depends.

Nearly two decades have passed since the March 1989 event. During that time, awareness of the risks of extreme space weather has increased among the affected industries, mitigation strategies have been developed, new sources of data have become available (e.g., the upstream solar wind measurements from the Advanced Composition Explorer), new models of the space environment have been created, and a national space weather infrastructure has evolved to provide data, alerts, and forecasts to an increasing number of users.

Now, 20 years later and approaching a new interval of increased solar activity, how well equipped are we to manage the effects of space weather? Have recent technological developments made our critical technologies more or less vulnerable? How well do we understand the broader societal and economic impacts of extreme space weather events? Are our institutions prepared to cope with the effects of a “space weather Katrina,” a rare, but according to the historical record, not inconceivable eventuality?

This could become a really nasty event in our history, and yet few people are actually talking about it. If I were a guy with a pacemaker I would freak out :(. What steps can we take to protect our infrastructure?


Does this look look like solar maximum? You need to correct your article! This actually a topic close to my heart as I have a note book dedicated to solar data!

Now get this we have been and are still recovering from the quietest solar period in nearly a century! Last time the data showed similar activity was around 1913 !

Solar activity Aja sunspot data is really skewed now as we can see both sides of the sun, spots not facing earth are currently not counted in order to keep consisted with the data collected since 1700. Astronomers could only count the spots facing earth and thus we still continue the tradition! It's retardted but we don't fully understand our star on so many levels!

Either way correct your article! Pls

There is the Space Weather Prediction Center with its website at www.swpc.noaa.gov. According to this we currently have a solar minimum and maximum is predicted to be around May 1913.

Arrg, and again: arrg! How annoying!