Kottmeyer: Why have UFOs changed speed over the years? 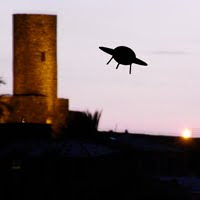 There's an excellent article by Martin S. Kottmeyer in The Philosopher's Magazine titled, "Why have UFOs changed speed over the years?" In the essay, Kottmeyer argues that UFO sightings are very much a product of observation selection effects and a kind of 'sightings bias'. The nature of UFO sightings, he says, change over time and are impacted by everything from advances in technology to sci-fi movies. Kottmeyer is basically arguing that people are seeing what they expect to see, and by consequence, are working within a "search template":

Despite a considerable variety in the reports, the form of the objects was always consistent with a type of aircraft. Propellers were often seen, one witness even claiming it was larger than the rest of the plane. Jet pipes, pilot’s cockpits, glass domes, fins, legs, and antennae featured on some of the objects. Smoke, vapour hails, and rocket flames repeatedly marked their flights. A wide range of aerobatic stunts turn up among the reports: loop-the-loops, roll manoeuvres, banking, weaving, climbing, diving, tipping, circling, and swooping. Some “UFOs” buzzed cars, but unlike decades later, the car engines never died. It has been thought significant that animals sometimes reacted to the objects, yet a close reading suggests it wasn’t because of their spooky alien-ness; the saucers were doing barnstorming manoeuvres.

Notable by its absence is any indication of extraterrestrial technology: no lasers, heat rays, paralysis rays or gases, mind control rays, power rings, levitation of people or objects, denaturalisation, matter interpenetration, space-suited entities, robots, remote eyes, or even simple observation ports. Nobody was looking for aliens and nothing was seen to suggest any were there.

Why did this shift from fast to slow take place? The simplest answer has to be the fading of memory. Arnold’s report lost its fascination as newer, better, shinier cases crowded it out for public attention. Cases like Socorro, Exeter, the Swamp Gas saucer of Dexter, Flynn, and The Interrupted Journey of Barney and Betty Hill captured people’s imaginations and became the models to which later experiences would be compared. The search template of what should be considered wondrous filtered out what seemed irrelevant. In 1947 people looked for speedy things and things that looked like discs, and ignored the slow stuff and the lights floating around at night. There was a heavy bias to misinterpreting flocks of birds.

Later, people searched for bright lights and slow, hovering objects and, as Allan Hendry showed, people had a bias towards misinterpreting stars, planets, and aeroplane lights.

Does this prove UFOs are unreal phantoms that blend in with their times? No. Strictly, it only proves that there is a cultural dimension in our assumptions about what constitutes the behaviour of a flying saucer. People do not report everything that is present in the sky but select only what is presumed to be interesting. What is interesting changes year to year, decade to decade, century to century. We’ve forgotten that Kenneth Arnold was interesting for reasons that no longer interest us. That, in itself, is interesting.