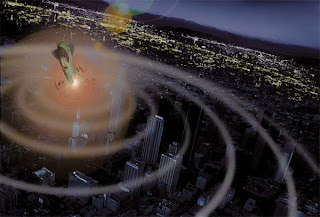 Michael Anissimov of Accelerating Future is feeling a bit doomy these days—and for good reason. He argues that we're collectively understating and underreporting non-conventional but thoroughly viable catastrophic risks, including the deliberate spread of botulinum toxin and an EMP attack.

On the latter risk, Anissimov writes:

If an EMP attack came, cars and trucks would just stop. Factories, controlled by computers, would stop. Molten steel on the assembly line would cool and solidify in place due to failure of the heating elements. The vast majority of tractors, combines, and other heavy machinery would become useless. Transformers and other electrical elements, large and small, would be fried. The largest transformers have to be ordered from China and are generally ordered with a year of lead time.

An effective EMP attack on the US would cause tens of trillions of dollars of damage. Cities would run out of food in a few days. The US grain stockpile only has about a million bushels of wheat. Wheat is the only common grain with enough nutrients to sustain someone on an all-grain diet. A bushel is only 60 pounds, and someone needs about a pound of wheat a day to avoid hunger pangs. Ideally two pounds if you are doing manual labor. 60 million man-days of food is not a lot. The population of the United States is 300 million. That means our grain stockpiles are enough food for everyone to eat a fifth of a pound and then they’re gone.

By the way, if you're particularly paranoid about this, you can always convert your house into a Faraday Cage. I'm just not sure how useful all your electronics will be given that everyone else's will be fried.

And in regards to the botulinum risk, he writes, "99.9% of the population will dismiss [it] as not a big deal, due to wishful thinking. It’s all just words on the page, until people start dying."
Posted by George at 9/04/2010

Something very heavy to consider, and I agree about the botulinum. It's much easier to dismiss it away.

"Your task, ye Weavers of Tales, is to create a fable of fairytale suitable for instilling the appropriate level of fear in children so they grow up appreciating all the lords do to protect them."

Do you know what I mean?

Thank you for bringing this up George. And thank you Duncan, for that explicit "plot".

People will likely be speculating instead of verifying and validating … and there will be lots of room for fear mongers that wish to gain influence over the easily frightened (or those that were rewarded as child for displaying fearful behavior so they could more easily be lorded over). A mere political game. Indeed not “intelligent speak”.

Military and research institutions are the actors that do have more information than “open source” (publicly available information). Scientists would do well if they released what more information is available from the tests, and military sources would do well to provide information on related scenario’s and possible preparation and mitigation strategies and tactics. I think a non-condescending and respectful attitude towards the public may be well worth considering.