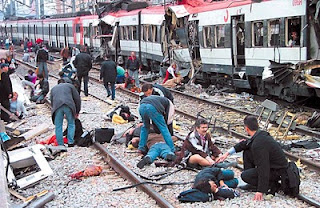 Psychologist William B. Swann, Jr., of the University of Texas has come up with the idea of "fused identities" to describe people who are exceptionally bound to their social group—so much so that they're willing to kill themselves to preserve it.

Those people who are "fused" with a group—a bond even stronger than group identification—will take extreme actions to protect other group members, but not outsiders. It is thought that this intense bond to a group may help explain the actions of suicide bombers.

Swann believes that there is something particularly unique about terrorists and other extremists that goes beyond simple identification. He calls this phenomenon identity fusion and argues that it has two characteristics that make it different from plain old group identity: (1) a sense that you and the group have a shared core essence, and (2) a feeling of reciprocal strength.

"You give the group strength and the group gets strength from you," says Swann. People who are fused with a group, whether it's a country or a military unit, often say they would be willing to fight and die for the group.

To test how fused people behave, Swann and his colleagues asked Spanish volunteers how they saw themselves in relation to Spain. This was done using a pictorial scale in which the person and "Spain" were overlapping circles; those who said their circle was completely inside Spain's were considered fused. Each participant answered some variation on the classic trolley problem (in which a runaway trolley is about to kill some people).

In one variation, the dilemma was whether the participant would jump on the tracks and die to save five Spaniards. People whose identities were fused with Spain were more likely to sacrifice themselves, while others would let their fellow Spaniards die. Additional experiments found that fused people would also sacrifice themselves for a group of Europeans—a group that includes Spaniards—and that they would be more likely to do so for Europeans than for Americans.

Perhaps the most striking finding was in the last experiment. In that scenario, participants imagined that it was the day of the Madrid bombings, and someone else was about to jump on the train tracks to kill both himself and the bombers. Fused respondents were more likely to say they would push the would-be martyr out of the way so that they could die to save others. "It's amazing to me that these guys would endorse that kind of behavior," says Swann. "It's just a little hard, as outsiders, to wrap our heads around the idea that people will sacrifice themselves to produce an outcome that would occur even if they did nothing."

This study may help explain why suicide bombers are willing to kill themselves: Fused individuals see their own essence and strength as coupled to the group they belong to. The research also has other applications, says Swann. In the military, for example, having service members fused to their group is important, so they'll act as a unit. "But when they come back, you want them to de-fuse with their group and re-fuse with their family," Swann says—an adjustment that is difficult for many people.
Posted by George at 8/18/2010