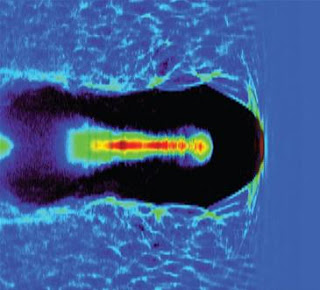 Writing in Technology Review, Christopher Mims is reporting on how physicists will soon be able to use Einstein's relativity to speed up supercomputer simulations by as much as 10,000%. He says it's not the algorithm or the hardware, but the reference frame that needed an update:

Physicists realized that because the laser is accelerating electrons in its path to nearly the speed of light, Relativistic effects start to be a big deal - the same effects first discovered by Albert Einstein.

And if we remember anything from A Brief History of Time or even the original Planet of the Apes, it's that at speeds approaching the speed of light, where the observer is standing has a huge impact on what they perceive - this is, for example, the reason that an astronaut traveling close to the speed of light would age much slower than the people he or she left behind on earth.

Previously, all simulations of laser-plasma accelerators were run from the perspective of a physicist standing somewhere in the vicinity of the experiment - in other words, someone who sees a super short laser pulse traveling at a near-stationary plasma. Mathematically, this is very hard to simulate - the laser is brief.

But what if, instead, we take the perspective of the plasma itself? Now, relative to the laser, it's as if the plasma is traveling toward the beam of light at near-light speed. Because of relativistic effects, this stretches out the beam of the laser, making it longer and mathematically more tractable to simulate.

Voila - the resulting algorithm is hundreds of times faster than previous attempts to simulate a laser-plasma accelerator.