NYT: Semenya Is Back, but Acceptance Lags 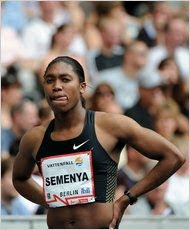 As I predicted, the return of intersexed athlete Caster Semeyna to the track is not being received very well by her fellow competitors. From the New York Times:

Like it or not — and many elite runners clearly do not — track and field’s governing body, the International Association of Athletics Federations, has ruled, after an excruciatingly lengthy process, that Semenya may compete as a woman.

Barring an intense and unlikely legal counterattack, it is difficult to imagine the association backtracking on Semenya now. Not after being justly pilloried for allowing news of her initial gender tests to become public; not after taking 11 months to clarify and confirm her eligibility, leaving her in a brutal state of limbo.