Neurosecurity: The mind has no firewall 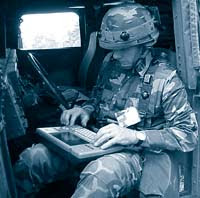 Neurosecurity and the potential for so-called 'mind hacking' has interested me for quite some time now, so I was surprised to discover that this topic was covered back in 1997 by Timothy. L Thomas. Writing in Parameters, the US army war college journal, Thomas warned that the American military risked falling behind in the burgeoning field of information warfare.

His particular concern was that military systems operators could be exploited as 'open systems.' "We need to spend more time researching how to protect the humans in our data management structures," he writes, "Nothing in those structures can be sustained if our operators have been debilitated by potential adversaries or terrorists who--right now--may be designing the means to disrupt the human component of our carefully constructed notion of a system of systems."

This "systems" approach to the study of information warfare emphasizes the use of data, referred to as information, to penetrate an adversary's physical defenses that protect data (information) in order to obtain operational or strategic advantage. It has tended to ignore the role of the human body as an information- or data-processor in this quest for dominance except in those cases where an individual's logic or rational thought may be upset via disinformation or deception. As a consequence little attention is directed toward protecting the mind and body with a firewall as we have done with hardware systems. Nor have any techniques for doing so been prescribed. Yet the body is capable not only of being deceived, manipulated, or misinformed but also shut down or destroyed--just as any other data-processing system. The "data" the body receives from external sources--such as electromagnetic, vortex, or acoustic energy waves--or creates through its own electrical or chemical stimuli can be manipulated or changed just as the data (information) in any hardware system can be altered.

Others, however, look beyond simple PSYOP ties to consider other aspects of the body's data-processing capability. One of the principal open source researchers on the relationship of information warfare to the body's data-processing capability is Russian Dr. Victor Solntsev of the Baumann Technical Institute in Moscow. Solntsev is a young, well-intentioned researcher striving to point out to the world the potential dangers of the computer operator interface. Supported by a network of institutes and academies, Solntsev has produced some interesting concepts. He insists that man must be viewed as an open system instead of simply as an organism or closed system. As an open system, man communicates with his environment through information flows and communications media. One's physical environment, whether through electromagnetic, gravitational, acoustic, or other effects, can cause a change in the psycho-physiological condition of an organism, in Solntsev's opinion. Change of this sort could directly affect the mental state and consciousness of a computer operator. This would not be electronic war or information warfare in the traditional sense, but rather in a nontraditional and non-US sense. It might encompass, for example, a computer modified to become a weapon by using its energy output to emit acoustics that debilitate the operator. It also might encompass, as indicated below, futuristic weapons aimed against man's "open system."

There's some great food for thought here, but as an important aside, it's worth noting that this article has a high bullshit to reality ratio. Overly enamored by the pseudoscientific areas of inquiry explored by his Russian colleagues, Thomas, quite bizarrely, placed as much credence on the development of viable alternative weapons (such as energy-based and psychotronic weapons) as he did on paranormal weapons. Consequently, the credibility of the entire article has to be thrown into question; I advise you to read this essay with a considerable grain of salt.

Link: "The Mind Has No Firewall"

This post reminds me of my childhood sci fi books. When I was in my early teens I fell in love with what was then science fiction. Growing up in a communist country, behind the thick drapes of the Iron Curtain, one of the first sci fi authors that I read was naturally Alexander Belyayev. In his "the Lord of the World" Belyayev describes the invention and wide-ranging global implications of wireless mind-control technology which had the power to subvert the free will of single individuals, whole armies or nations. I never thought that there will be a day that I'd be trying to figure out if it is still pure fiction or if there is some science behind it...