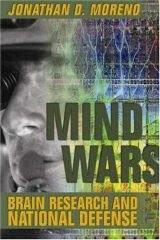 Along the lines of my previous post on neurosecurity and information warfare, check out this book by Jonathan D. Moreno: Mind Wars: Brain Research and National Defense (2006). Synopsis:

Imagine a future conflict in which one side can scan from a distance the brains of soldiers on the other side and learn what they may be planning or whether they are confident or fearful. In a crisply written book, University of Virginia ethicist Moreno notes that military contractors have been researching this possibility, as well as the use of electrodes embedded in soldiers' and pilots' brains to enhance their fighting ability. Moreno (Is There an Ethicist in the House?) details the Pentagon's interest in such matters, including studies of paranormal phenomena like ESP, going back several decades. Readers learn that techniques like hypersonic sound and targeted energetic pulses to disable soldiers are close to being used in the field, and even have everyday applications that make "targeted advertising" an understatement. Despite the book's title, Moreno doesn't limit his discussion to brain-related research; he explains the military's investigation of how to enhance soldiers' endurance and reaction time in combat as well as various nonlethal disabling technologies. The ethical implications are addressed throughout the book, but the author leaves substantive discussion to his praiseworthy last chapter.

I really don't know what to make of these claims that the US military is delving into the paranormal. Almost sounds like deliberate disinformation. Or that the higher-ups can't distinguish between sound scientific principles and the work of quacks.
Posted by George at 8/22/2010