Global Politician columnist Sam Vaknin argues in a recent article that science fiction is guilty of ten specific mistakes when postulating the characteristics of advanced extraterrestrial life. Specifically, he contends that sci-fi writers consistently buy into fallacies about: 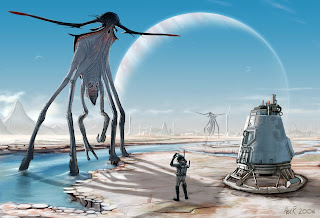 While the article certainly raises some food for thought, Vaknin's call for writers to think more 'outside of the box' is a bit of a stretch, if not condescending. Science fiction writers, for the most part, take great pains to weave a coherent narrative around novel imaginings of what ETIs might look like. Moreover, Vaknin is himself guilty of considerably hand-waving, arguing that ETIs may be existentially and qualitatively of a different sort than what we might expect, but at the same time he doesn't provide any substantive or compelling evidence for us to believe otherwise.

Sure, I agree that ETIs may be dramatically different than what we can imagine and that they may exist outside of expected paradigms, but until our exoscience matures we should probably err on the side of the self-sampling assumption and figure that the ignition and evolution of life tends to follow a similar path to the one taken on Earth. Now, I'm not suggesting that we refrain from hypothesizing about radically different existence-states; I'm just saying that these sorts of extraordinary claims (like alternative intelligences spawning different quantum realities) require the requisite evidence. It's far too easy to fantasize about some kind of energy-based hive-mind living in the core of asteroids, it's another thing to prove that such a thing could come about through the laws of physics [my example, not Vaknin's].

In the article, Vaknin also posits six basic explanations to the Fermi Paradox (and the apparent failure of SETI) that are not mutually exclusive:
Very quickly, point number one is possible but grossly improbable, points two to five are essentially the same argument—that we don't yet know where, how and what to look for, and point six violates the non-exclusivity principle (explains some but not all ETI behavior). It's odd that Vaknin selected these particular six arguments. There are many, many potential resolutions to the FP with these not being particularly stronger than any other (though point #1 has a lot of traction among the Rare Earthers.). And where is the Great Filter argument, which is possibly the strongest of them all?

Nice try, Vaknin, but the Great Silence problem is more complex than what you've laid out.
Posted by George at 6/27/2010

Oh George, why use the word "alleged" when referring to our environmental destruction? Is the BP spill just not an issue?

His word, not mine.

The gross oversight was that the purpose of ETs in science fiction narratives is to provide a mirror so we may better explore our own humanity. That 24th century Klingons are violent wasn't the point... the point was for Cold War Americans and Russians to be less violent.

I'm with you, George, though I find that Nick Bostrom's "Great Filter" arguments fallacious.

Each time I hear him speak about this, it seems he's assuming this filter is necessarily of a negative nature (e.g. nuclear annihilation, supernovae).

I believe he's omitting two possibilities:
1- the "great filter" could be of a positive or neutral nature (e.g. all sufficiently advanced civilizations transcend the universe as we know it and are thus undetectable via our current technologies)
2- The great filter may not exist. It seems to me possible - almost by his own recent arguments - that no matter how advanced any civilization has become, it is impossible for it to travel the distances required (or even send information the distances required) to make contact with any other advanced civilization. In other words, the universe is simply too spacious for us to ever connect with any other alien civilization. While this seems unlikely to me, it certainly seems possible (and not merely theoretically so), and I can't understand why Nick omits such considerations. What do you think?

Also, cool pic to accompany your piece. Who's the artist? Reminds me of Wayne Barlowe.

There is another possibility here:

Let's say, for the sake of argument, that an ETI happens across Earth and rather than racing up and making first contact they sit back for a while and observe to see what they'd be getting themselves into. They would see a species that had just taken its first steps toward unmanned interplanetary travel (probes) and had made a few attempts at manned travel in local space (i.e., not farther than its moon). The race had just figured out how to construct nuclear weapons and is still locked into an us-vs-them mentality. This could be picked up by monitoring their activities planetside and the content of their broadcast media.

It seems reasonable for an ETI to decided that such a comparatively primitive species (compared to one which has figured out interstellar travel) would be too twitchy to risk making first contact. The dominant species on the planet barely trusts itself, so there's no telling what they might do if a dialogue was suddenly opened by a more advanced race. Maybe the dominant species on this planet would lob a couple of their heaviest-duty nukes at the ETI (never a good time), or maybe they'd open up on each other out of fear (the opportunity would be lost).

All things considered, it would make more sense for the ETI to record the location of Earth and come back later, hopefully after the human race had solved its problems and hopefully had set aside some of its less practical foibles.

You opine that Explanation #1, no aliens, is "grossly improbable', but you have no way to back that up. In the 50 years since astrobiology began, it's become easy to find enough infinitesimal terms in the Drake Equation to yield N=1, even if you include all the galaxies within 10 billion light years.

Start out with the rare planet with the right size, distance, and magnetic field, then ask:
What is the probability of a stabilizing Moon? (<1E-6 or less)
of a non-migrating Jupiter? (tiny)
of the right amount of ocean water? (0.1%)
of vertebrates? (no bones, no myelination)
of the rubisco molecule? (only happened once here)
of angiosperms? (no fruit, no primates), and --
I haven't even started on the tiny probabilities of intelligence, of civilization, of the rise of a modern world.

The product of so many tiny probabilities is small enough to make the no-alien case quite plausible.

Can you imagine the let-down if Kepler's February data release has zero exo-Earth-candidates?
Would that be enough for you to drop your assertion of 'grossly improbable'?