Is geoengineering an existential risk? 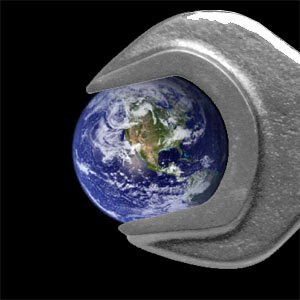 Well, Milan M. Ćirković and Richard B. Cathcart think it's a distinct possibility. In fact, it may even (partly) explain the Great Silence. Check out the abstract to their article, "Geo-engineering Gone Awry: A New Partial Solution of Fermi's Paradox":

Technological civilizations arising on such planets will be, at some point of their histories or another, tempted to embark upon massive geo-engineering projects. If, for some reasons only very recently understood, large-scale geo-engineering is in fact much more dangerous than previously thought, the scenario in which at least some of the extraterrestrial civilizations in the Milky Way self destruct in this manner gains plausibility. In addition, we speculate on possible reasons, both physical and culturological, which could make such a threat even more pertinent on an average Galactic terrestrial planet than on Earth.

Be sure to read the entire article (PDF). Learn more about geoengineering. And be sure to read Jamais Cascio's article, "It's Time to Cool the Planet."
Posted by George at 1/27/2010

I think it would probably be safer to colonize space than to try messing with the ecosystem inhabited by 100% of the human race. Though it would be really expensive and probably not very popular.

Still betting on an as-yet-uncovered theorem by which Fermi Paradox is reconciled by a principle of exponential entropy specific to singularity threshold civs.

I never claimed this unproven (and undescribed) principle would be cheery. Just elegant.

I have always been in awe of the shear size of the earth. I think that the only thing saving the earth from us is the fact that it is so much more massive than anything that man can build. I assume that if we do break a system (something none permanent) then the other systems would just go crazy until everything stablises again. Obviously the earth isn't going to think twice about slowly/quickly reseting itself.

But if we do break something permanent such as the moon, then heaven help us. It would be a slow boring death for us all.