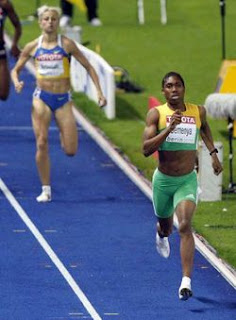 The New York Times is reporting that a panel of medical experts convened by the International Olympic Committee is recommending that the issue of athletes whose gender seems ambiguous be treated as a medical concern and not one of fairness in competition:

Athletes who identify themselves as females but have medical disorders that give them masculine characteristics should have their disorders diagnosed and treated, the group concluded after two days of meetings in Miami Beach. The experts also said that rules should be put in place for determining an athlete’s eligibility to compete on a case-by-case basis — but they did not indicate what those rules should be.

“We did not address fairness,” said Dr. Joe Leigh Simpson of Florida International University. He is an expert on such disorders and participated in the meeting. “The entire concept was that these individuals should be allowed to compete.”

The decision is in reaction to the recent controversy surrounding Caster Semenya, an intersex athlete who won the 800 meters at the world championships in Berlin last August.

While this clearly solves a problem for the IOC, the decision to "treat" athletes with genetic abnormalities will likely have far reaching repercussions for those with other types of genetic endowments. The IOC is in danger of opening a pandora's box in which virtually every athlete with a biological advantage will be questioned.

Immediate examples include swimmer Michael Phelps with his many advantageous traits (including the possibility of Marfan Syndrome) and those athletes with higher levels of hemoglobin which gives them superior oxygen-carrying capability.

But as any athlete knows, it doesn't even need to be this extreme. There's never been a perfectly level playing field in sports, whether it be the quality of the facilities, coaching, funding, and of course, genetic constitutions. Dedication and heart will only get professional athletes so far; so many winners these day are, for all intents-and-purposes, genetic freaks. To suddenly start 'treating' these sorts of athletes and constrain their physicality within a pre-determined sense of normality is overtly problematic.

Who is the IOC to determine what is physically normal in sport? Why should the attainment of fitness peaks (natural or otherwise) be prevented or constrained? And how could they ever come to describe the perfectly 'normal' human athlete?

The IOC is clearly hoping that this issue will be limited to intersex athletes, but what's to prevent others from crying foul when they feel that they're at a genetic disadvantage? The IOC needs to tread very carefully should they chose to move forward with this recommendation.
Posted by George at 1/20/2010

Yet another instance of intolerance towards those who differ from the majority of 20th-21st century humans. It seems that the fewer people display a certain characteristic, the more likely it is to be labeled a disease.

This lacks tact, but the position is sound if you support womens athletics. So long as the intersexed are permitted to compete in the unrestricted category, barring them from the women's category is no worse than barring the able bodied from the paralympics.

It might make sense to give them their own category, but I doubt there's enough of them.

What about if the athletes are better for racial reasons? Are they going to "cure" gay people too?

Once upon a time I had the opportunity to watch a volleyball player who was not as athletic as the other players, but had the advantage of being able to make moves which were more sophisticated. The reaction of some of the, well, not so intelligent athletes was accusing him of playing deviously -- accompanied by the corresponding body language. For those people intelligence is a dishonest advantage.