Postgendered athletes in sports: Should intersexed persons be allowed to compete? 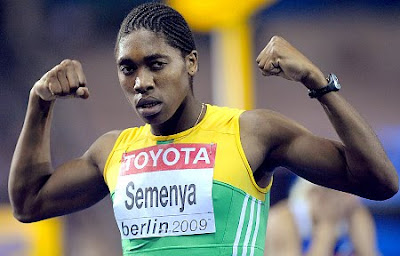 So, the mystery has been solved: world 800-meter champion Caster Semenya of South Africa has both male and female sexual organs.

Extensive physical examinations of the 18-year-old runner ordered by the IAAF have shown she is technically intersexed. More specifically, she has no ovaries, but instead has internal male testes, which are producing large amounts of testosterone.

It's all about the testosterone

Testosterone is a natural hormone -- but it is a common performance-enhancing doping substance used by athletes. According to the World Anti-Doping Agency, testosterone, and other hormones that boost testosterone levels, such as growth hormone, are among the most widely abused performance enhancers in sport.

Women do not have nearly as much testosterone as men. In fact, women have about 15 to 20 times less testosterone. And it's the primary reason why men are men and women are women. After men hit puberty, for example, they grow facial hair, their voice deepens and they develop muscle mass. Men have more testosterone, so they are much more equipped to gain muscle.

There's no question, then, that Semenya's unique physical condition gives her a decided advantage against her testosterone deprived female competitors. Consequently, the IAAF now has a difficult decision: should Semenya be disqualified? And should she even be allowed to compete?

The IAAF has already admitted that Semenya is not at fault here. This is not a doping issue. According to the IAAF, "These tests do not suggest any suspicion of deliberate misconduct but seek to assess the possibility of a potential medical condition which would give Semenya an unfair advantage over her competitors. There is no automatic disqualification of results in a case like this."

Their decision will be an important one because it will determine whether or not intersexed persons will be able to compete against regular males and females. If they rule that Semenya cannot compete, the IAAF will essentially be saying that there are some 'natural' physical conditions that have to be sanctioned against.

The potential implications are huge.

For instance, should an athlete like Michael Phelps (the 'natural transhuman athlete) -- who clearly has a decided genetic advantage -- be prevented from competing against less-endowed athletes? The question almost seems absurd, but this may be the path we are embarking upon.

If we start to regulate against so-called 'natural physical traits', where would we draw the line? Which genetic advantages would be fine and which wouldn't be? Why? And to what degree?

Sports in the postgendered future?

But looking ahead even further, it may also set a precedent for a prohibition against the deliberate blurring of male and female traits for competitive advantage. It's not unreasonable to suggest that some professional athletes -- women in particular-- may willingly adopt traits of the opposite sex to give them an edge. And as medical biotechnologies continue to advance, there's a very distinct possibility that such interventions may become more available.

It has been my contention that, as the human species enters into a transhuman condition, strictly stratified gender designations will begin to blur. Men and women will consciously trade-off advantageous gender-specific traits (both physical and cognitive), while discarding some gendered traits altogether. Gender may eventually become a thing of the past -- a legacy of our biological heritage.

Now, should the IAAF rule against intersexed persons, and by logical extension postgendered humans (including transgendered individuals), it would appear that the future has no place for these type of athletes.

This will clearly become a problem of discrimination. And it will likely be compounded by all the other 'enhancement' related interventions that future holds.

The IAAF has its work cut out for itself; as time passes, the issue of enhancement in sports can only get more and more complex.
Posted by George at 9/10/2009

I think the slippery slope argument doesn't apply here because the line is drawn in the simple fact that this is a women's sport-- you have to follow the rules of however many meters running it entails, and you have to be a woman, and you try to be the fastest, and that's it.

Obviously all these female athletes have tremendous advantages over all of us mere mortals, but if things are going to be divided up by gender, you must do just that, disqualifying those who aren't only that particular gender, such as Semenya.

The real tragedy is that South Africa was so determined to have a winner that they didn't have Semenya tested long ago. While it has been said that Semenya considers herself a woman, that doesn't explain everything because she's the only competitor out there wearing the running outfits of male runners-- I've never seen a female competitor besides her wear the same as the men. It was obvious to anyone with eyes something was going on, and it's too bad that the South African delegation didn't take care of it long ago without making international news.

Is she permitted to compete as a man?

I'd be more sympathetic to the IOC on these issues if they'd enforce the "amateur" status Olympians are supposed to have.

@mpkirkland - The IAAC hasn't made a decision yet. That may be a possibility, in which case her career would be finished as she wouldn't be able to compete with full-out males.

@Steve
An act which would essentially do away with woman's athletics. Is that your desired outcome?

@George: It would be an interesting precedent. I wonder what it would mean for events where women are on par or superior to men. (Marathons?)

Once her testes are removed, her advantage will be lost. Will she be allowed to again re-enter women's sports? If so, fair. If not, discrimination.

Quick Query: I was under the impression the test results had not been made public. Where did you hear them?

@Richard -- the medical results leaded to the press, so it's still unofficial.

My immediate reaction is "of course she shouldn't be discriminated against for being intersexed, but (like midnightsun said) its a women's competition, so anyone who is not a woman shouldn't be allowed to compete." it's not a matter of where we draw the line, which is totally arbitray, but that we draw clear lines when we draw them.

Still, even though semenya wasn't accused of deliberate doping, the incentive to do so is clearly there. Just like baseball players lying about their ages, women (and men, if there's a equivalent competition) will be even more inclined to blur their genders close to the line when the line becomes clear. Maybe that's ok, and its certainly kind of cool, since this whole binary conception of gender has a smaller place in a transhuman future. But couldn't it wind up meaning women will try to be as close to men without going over whatever genetic or hormonal line we draw? Again, maybe not so bad, but a little eerie nonetheless.

The solution is simple.

Create *leagues* of competetive sports. Each "league" functions as a 'foundation' or 'club' with contractual laws. These laws are changed in a sensible, insightful, fair manner and re-affirmed every year. Athletes can then join the league of their choice, and upon joining they explictlty underwrite the contract (and accept contractual penalties in case they violate the league's laws) each and every year. The point here is - these laws are known in advance. Nobody gets humiliated or excluded or persecuted - if you have some kind of magical steroid gland dangling somewhere you read the fine print *IN ADVANCE* and decide, hey maybe this league is not the one I am looking for.

Then let thse fabulous markets figure it out for themselves. It may turn out voting citizens and consumers may not like these 'faggoty baseline competitions' and want cagefights between HGH boosted thai boxers with adamantium spurs. It's a free world. Equally likely, the public may scorn "enhanced freakshows and mutants and cheaters" opting for the au naturel baseline humans. As long as these renew the leagues contracts each year, there is not a worry on my mind.

But the era of 'natural' is dead and buried. We have entered unnatural. We are now in the realm of 'in parenthesis' and 'contextual' and 'conditional'. You can't assume anything unless you spell it out.

I couldn't care less. I have always held these competition sports in contempt as indicative of the most contemptible of human drives - the urge that in order to win, some MUST lose. I don't scorn physical fitness or fairness or competition - I loathe these orgiastic zero sum spectacles. They are part of a world I want nothing to do with.

Intersexed persons should be able to compete in sports. I agree with the possibility of different "leagues."

In the ideal future, their will be no more concern with doping, or gender because we'll all be doped up and postgendered beings.

In the meantime I think we simply need to invent a new sport that welcomes both sexes and promotes doping.

Of course most doping is kind of destructive, so we'll have to focus on the good-drugs.

Each athlete will have a specific biotech/pharmaceutical company that sponsors them.

It will have a reality show that follows the progress of the athletes development and it will cause a lot of controversy.

I'm really surprised at this - there have been no official results yet - how can you speculate on something that was "leaked".

It is highly probably that Caster is intersex and she will be walking a long and very painful path from now dealing with this new and confusing reality that her family, will never fully understand.

As for World Athletics - of course she has an unfair advantage and greedy prideful officials at Athletics South Africa were so keen on a Gold medal that they sacrificed her for it. The the IAAF supposedly "leaked" the results of the gender tests to an Australian journo.
What a way to treat an innocent 18 year old kid! (Please believe me when I tell you that an 18 year old from a very rural area in South Africa is VERY different from and 18 year old in the West).