Athena Andreadis guest blogging in May 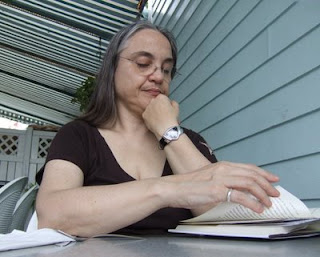 I'm pleased to announce that Athena Andreadis will be guest blogging on Sentient Developments during the month of May. Andreadis is a fellow of the IEET, Associate Professor of Cell Biology at the University of Massachusetts Medical School, and the author of To Seek Out New Life: The Biology of Star Trek.

Athena arrived in the United States from Greece at 18 to pursue biochemistry and astrophysics as a scholarship student at Harvard and MIT. She narrowly chose the former discipline while never fully abandoning the latter, and now conducts basic research in molecular neurobiology. Among her academic endeavors she studies the gene regulatory mechanism known as alternative splicing. The long-term goal of her research is to understand how the brain works, and contribute to the struggle against mental retardation and dementia. 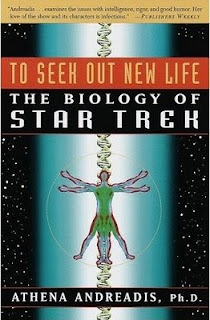 When not conjuring in the lab, Athena writes (and used to review) fiction, an unexpected benefit of chronic insomnia. She has always wondered about the possibility of life on other planets and the limits of the human body/mind in radically altered environments. Combining these interests, she wrote To Seek Out New Life: The Biology of Star Trek (which I'm proud to say has a spot on my shelf) a stealth science book that explores biology, psychology and sociology through the lens of eponymous series. In the wake of the book, she got invited to give talks in venues ranging from NASA to the NIH and to write articles in such places as Astronomy Magazine and Strange Horizons.

In addition to these pursuits, Andreadis reads voraciously, collects original art and has traveled extensively.

I'm very much looking forward to seeing her contributions here on Sentient Developments.

In the meantime, be sure to check out her articles, "Why Science Needs Fiction," "E. T., Call Springer-Verlag!", and "We Must Love One Another or Die: A Critique of Star Wars."
Posted by George at 5/05/2009