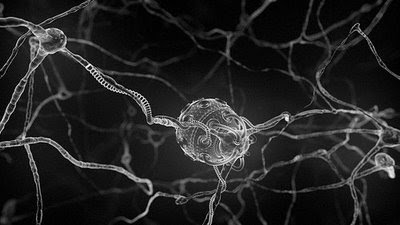 Previously in series: The Ethics of Simulated Beings, Descartes's Malicious Demon and The Simulation Argument.

As previously noted in this series, our entire world may be simulated. For all we know we're sitting on a powerful supercomputer somewhere, the mere playthings of posthuman intelligences.

But this is not the only possibility. There's another way that this kind of fully immersive 'reality' could be realized -- one that doesn't require the simulation of an entire world. Indeed, it's quite possible that your life is not what it seems -- that what you think of as reality is actually an illusion of the senses. You could be experiencing a completely immersive and totally convincing virtual reality right now and you don't even know it.

How could such a thing be possible? Nanotechnology, of course.

In his book, The Singularity is Near, futurist Ray Kurzweil describes how a nanotechnology powered neural network could give rise to the ultimate virtual reality experience. By suffusing the brain with specialized nanobots, he speculates that we will someday be able to override reality and replace it with an experience that's completely fabricated. And all without the use of a single brain jack.

First, we have to remember that all sensory data we experience is converted into electrical signals that the brain can process. The brain does a very good job of this, and we in turn experience these inputs as subjective awareness (namely through consciousness and feelings of qualia); our perception of reality is therefore nothing more than the brain's interpretation of incoming sensory information.

Now imagine that you could stop this sensory data at the conversion point and replace it with something else.

That's where the nano neural net comes in. According to Kurzweil, nanbots would park themselves near every interneuronal connection coming in from our senses (sight, hearing, touch, balance, etc.). They would then work to 1) halt the incoming sensory signals (not difficult -- we already know how to use "neuron transistors" that can detect and suppress neuronal firing) and 2) replace these inputs with the signals required to support a believable virtual reality environment (a bit more challenging).

As Kurzweil notes, "The brain does not experience the body directly." As far as the conscious self is concerned, the sensory data would completely override the feelings generated by the real environment. The brain would experience the synthetic signals just as it would the real ones.

Clearly, the second step -- generating new sensory signals -- is radically more complicated than the first (not to mention, of course, the difficulty of creating nanobots that can actually work within the brain itself!). Creating and transmitting credible artificial sensory data will be no easy feat. We will need to completely reverse engineer the brain so that we can map all requisite sensory interactions. We'll also need a fairly sophisticated AI to generate the stream of sensory data that's needed to create a succession of believable life experiences.

But assuming we can get a nano neural net to work, the sky's the limit in terms of how we could use it. Kurzweil notes,

You could decide to cause your muscles and limbs to move as you normally would, but the nanobots would intercept these interneuronal signals, suppress your real limbs from moving, and instead cause your virtual limbs to move, appropriately adjusting your vestibular system and providing the appropriate movement and reorientation in the virtual environment.

From there we will create virtual reality experiences as real or surreal as our imaginations allow. We'll be able to choose different bodies, reside in all sorts of environments and interact with our fellow neural netters. It'll be an entirely new realm of existence. This new world, with all its richness and possibility, may eventually supplant our very own.

And in some cases, we may even wish to suppress and alter our memories such that we won't know who we really are and that we're actually living in a VR environment...

In Neurotypical people the frontal lobes (where sensory information passes through) filter out some sensory information. So you could say that most people are at least partially living in their own dream world already. Ironically people with Autism or Aspergers (whose frontal lobes aren't fully functional) are often said to be living in their own fantasy world when in reality it's the other way around.