Welcome to the Machine, Part 3: The Simulation Argument

Previously in series: The Ethics of Simulated Beings and Descartes's Malicious Demon. 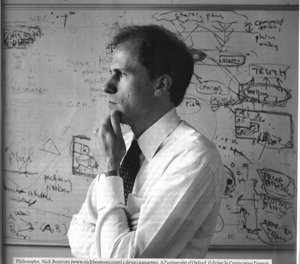 No longer relegated to the domain of science fiction or the ravings of street corner lunatics, the "simulation argument" has increasingly become a serious theory amongst academics, one that has been best articulated by philosopher Nick Bostrom.

In his seminal paper "Are You Living in a Computer Simulation?" Bostrom applies the assumption of substrate-independence, the idea that mental states can reside on multiple types of physical substrates, including the digital realm. He speculates that a computer running a suitable program could in fact be conscious. He also argues that future civilizations will very likely be able to pull off this trick and that many of the technologies required to do so have already been shown to be compatible with known physical laws and engineering constraints.

Similar to futurists Ray Kurzweil and Vernor Vinge, Bostrom believes that enormous amounts of computing power will be available in the future. Moore's Law, which describes an eerily regular exponential increase in processing power, is showing no signs of waning, nor is it obvious that it ever will.

To build these kinds of simulations, a posthuman civilization would have to embark upon computational megaprojects. As Bostrom notes, determining an upper bound for computational power is difficult, but a number of thinkers have given it a shot. Eric Drexler has outlined a design for a system the size of a sugar cube that would perform 10^21 instructions per second. Robert Bradbury gives a rough estimate of 10^42 operations per second for a computer with a mass on order of a large planet. Seth Lloyd calculates an upper bound for a 1 kg computer of 5*10^50 logical operations per second carried out on ~10^31 bits – this would likely be done on a quantum computer or computers built of out of nuclear matter or plasma [check out this article and this article for more information].

More radically, John Barrow has demonstrated that, under a very strict set of cosmological conditions, indefinite information processing (pdf) can exist in an ever-expanding universe.

At any rate, this extreme level of computational power is astounding and it defies human comprehension. It’s like imagining a universe within a universe -- and that's precisely be how it may be used.

"Let us suppose for a moment that these predictions are correct," writes Bostrom. "One thing that later generations might do with their super-powerful computers is run detailed simulations of their forebears or of people like their forebears." And because their computers would be so powerful, notes Bostrom, they could run many such simulations.

This observation, that there could be many simulations, led Bostrom to a fascinating conclusion. It's conceivable, he argues, that the vast majority of minds like ours do not belong to the original species but rather to people simulated by the advanced descendants of the original species. If this were the case, "we would be rational to think that we are likely among the simulated minds rather than among the original biological ones."

Moreover, there is also the possibility that simulated civilizations may become posthuman themselves. Bostrom writes,

They may then run their own ancestor-simulations on powerful computers they build in their simulated universe. Such computers would be “virtual machines”, a familiar concept in computer science. (Java script web-applets, for instance, run on a virtual machine – a simulated computer – inside your desktop.) Virtual machines can be stacked: it’s possible to simulate a machine simulating another machine, and so on, in arbitrarily many steps of iteration...we would have to suspect that the posthumans running our simulation are themselves simulated beings; and their creators, in turn, may also be simulated beings.

Given this matrioshkan possibility, the number of "real" minds across all existence should be vastly outnumbered by simulated minds. The suggestion that we're not living in a simulation must therefore address the apparent gross improbabilities in question.

Again, all this presupposes, of course, that civilizations are capable of surviving to the point where it's possible to run simulations of forebears and that our descendants desire to do so. But as noted above, there doesn't seem to be any reason to preclude such a technological feat.

The Missed Call Of Cthulhu said...

"Bostrom applies the assumption of substrate-independence ..."
An assumption without evidence until today.
"He speculates that a computer running a suitable program could in fact be conscious."
*Merely* speculative. There are good reasons for questioning this.
"... Bostrom believes that enormous amounts of computing power will be available in the future."
But nobody really knows.
" Moore's Law... is showing no signs of waning, nor is it obvious that it ever will."
I have read plausible statements made by IT experts, telling just the opposite.
"... this would likely be done on a quantum computer or computers built of out of nuclear matter or plasma ..."
Still nobody knows if quantum computers are possible to construct at all, the same for the other two. Saying "likely" is ridiculous.
"Let us suppose for a moment that these predictions are correct"
No, not "predictions". Bostrom doesn't have his concepts right - again.
"... later generations might do ..."
Or they might not.

"This observation, that there could be many simulations, led Bostrom to a fascinating conclusion."

Come on, George, there is no *observation*. This would imply, that there is something we can really see -- or "see". Bostrom starts from unfounded assumptions and from mere speculations, ignores a *lot* of evidence contradicting his position, and he even ignores facts.

I read Bostrom's publications as science-fiction -- I like science-fiction very much --, and I'm really entertained. But most of what he says is speculative to an extent, that I can only laugh about any attempt to discuss it as science.

Bostrom's work is a lot less interesting that it may seem at first George.

This is really just ancient religous ideas cloaked in modern sounding jargon - i.e. there are hidden realms with super beings manipulating human lives. *Exactly* the same arguments against the existence of God apply to the existence of simulator overlords.

There are two main arguments against:

(1) The simple reason is that such simulations would be entirely unethical and anyone in the future attempting it would be quickly stopped and arrested by powerful FAIs. (moden version of the problem of evil).

(2) Anthropic Reasoning itself is highly dubious and probably wrong (the semantic meaning of what constitutes a class of observers is ambiguous and this invalidates the reasoning).

But there's a far more compelling reason why we shouldn't take much notice of the simulation argument and it's this:

*If* we are being simulated, *then* the unneccessery suffering shows the beings running the simulation are unethical. But if the simulation owners are in fact unethical then we can say nothing useful at all about anything... Descrates' Demon could make us belive anything.

Therefore, in order to reason at all we *must* assume that we can trust our reasoning procedures, ergo, we *cannot* start by assuming we are in a simulation owned by unethical beings, else the whole of rationality collapses.

It's shame that someone as clever as Nick Bostrom is wasting his time on this when he should be out coding the SAI. I guess that as an academic Nick has to keep saying cool and unusual things as part of his job description as 'top philosopher' despite the fact that of course the simulation argument is just as fruitless as religion.

My favorite film that deals with this issue is "The Thirteenth Floor."

The philosophical and ethical questions raised by this issue are interesting and relevent to the human condition in general, wether it's true or not.

The simulation argument is unnecessarily over complicated. The nervous system cannot possibly distinguish between 'real' and 'illusory' sources of signals. The is no way therefore for any such distinction to hold water. The only concept of 'real' can be assigned to the self persisting nature of the dynamic neural pattern. But even considering this criterion, from the stand point of the nervous system, a successful persistence depends solely on relations between neural patterns and never on any kind of 'external' platform. It is therefore nonsense to engage in the speculation of a simulated universe because being the organisms that we are, we can never tell the difference between real and simulated.