Peter Singer: To defame religion is a human right 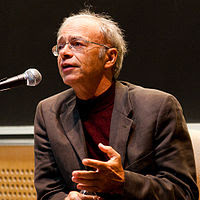 As a supporter of the UN this came as both a shock and a disappointment. It's a step in the wrong direction as we work to protect and improve the integrity of the world's cultural health. It's also a punch in the face for freedom of speech advocates.

But leave it to Princeton's Peter Singer to tell it like it really is. In a recent article for the Guardian, Singer argues that defaming religion is hardly a human rights violation. On the contrary, says singer -- it's actually a human right. We must defend the right to cause offense to believers, argues Singer, but only when it's not meant to stir up hatred.

Sounds reasonable to me.

This is worrying. I'm all for human rights but does this mean that Richard Dawkins is wrong for giving his view that religion is harmful? Presumably the religious are still allowed to say that atheism is the work of the devil. Surely we're entitled to freedom of speech as long as we're not inciting to hatred?

I saw Ezra Levant in London this week. He was the publisher of the Western Standard that had a human rights complaint filed against his magazine because they published the Danish Islamic cartoons. Pretty much the only Canadian news paper/magazine to do so. The case was thrown out, thankfully, but their defense was this it was printed as a news story (because of the resulting riots), not as an attempt to stir up hatred.

But at the same time, he said anyone has every right to publish something to cause offense, as long as it does not advocate violence against someone. That is already part of our criminal code.

The Canadian Human Rights Commission has been attacking people using Section 13.1 of the Canadian Human Rights act that states you cannot publish or say something that is “likely to expose a person or persons to hatred or contempt.” It is a quasi-judicial, kangaroo court that is now out of control. Unfortunately, the UN and EU are trying to push similar types of laws in place.

Support the UN despite this, OK.
Support the UN despite the fact that this behavior is absolutely typical of them? WTF?!? This simply has to be about connotations, identity, etc, not a dispassionate evaluation of what the organization is or even of what the alternatives are. Give me the WTO any day. They actually rule against the security council occasionally AND support liberal values!

I feel I could substitute the word Republican Party for UN in the above sentence.

This is actually typical of the nonsense that comes out of the modern UN. Look at the UN's Human Rights Commission-- the only country that has been censured for human rights violations is Israel (19 times the last I heard).

That's right, according to the UN's official committee patrolling human rights, Israel is the only country that has committed human rights violations on this Earth in the past 50 years. It's absolute madness.

Meanwhile, the UN will probably pass this resolution which itself violates human rights. How ironic.