Much ado about swine flu 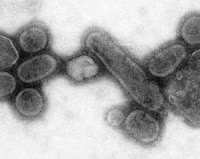 Well, mark another successful prognostication by yours truly: Back on November 6 I correctly predicted that Barack Obama would likely have to manage a pandemic at some point during his presidency. Little did I realize that it would happen so quickly, arriving at the 100 day mark of his administration.

But thankfully it is far less severe than what I had imagined (assuming, of course, that there won't be another). Yes, the swine flu is now poised to sweep through the human population, but it's a relatively mild bit of nastiness. The media, I believe, is largely responsible for overhyping the situation.

It's worth noting that on any given day about 100 Americans and a dozen Canadians die from the regular flu. Those who die from it are typically the elderly or those with pre-existing conditions. At the time of this writing it's largely unclear as to how many people have died from the swine flu in total. Some reports say over 150, while others claim no more than 7. It's clear that this ain't ebola.

Where there should be concern, however, is that the swine flu, due to its epidemic rate of infection, is set to hit more people than the usual strain. This will undoubtedly result in more deaths than usual, so in this sense it's a serious problem. But as for a the apocalypticism that's being perpetuated right now, let's not get carried away.

Now, that said, I'm also concerned that the strain will have a heightened chance of genetic mutation due to the dramatic increase in its propagation rate. This is a concern because it could quickly evolve (either alone or in conjunction with another virus) as something far, far worse. It's for this reason that the WHO and other institutions (including world governments) should keep a close eye on this bug and the situation.

Lastly, to all the conspiracists who claim that this is a man-made virus meant to revitalize the economy, grab a life and lose the paranoia.

[Be sure to read Michael Anissimov's take on the matter: "Following the flu and catastrophic risk in general"]
Posted by George at 4/29/2009

"*Where there should be concern, however, is that the swine flu, due to its epidemic rate of infection, is set to hit more people than the usual strain."

Seasonal flu spreads rapidly, what difference in infection rate are you talking about?

ZarPaulus, in the U.S. a 1% case-fatality rate with 20% of the population infected would kill close to 600,000 people. Globally (holding those numbers constant, and mortality would tend to be higher in less developed countries) the dead would outnumber Holocaust victims.

I think you're probably right but there is still that little frisson of fear from all the media coverage.

Certainly ZarPaulus has a point and I do think the media scaremonger whenever they can. I guess it's more exciting for them.

I'll keep taking my vitamin C and add in echinacea if need be. I shall try not to panic.

The unnecessary fear over this bug is driving my family looney. Think I'll turn off CNN and curl up with Camus' The Plague for a reread.

It's easy to throw money at a 'normal' disaster, flood or earthquake, but this problem needs improved communications and creative thought.

Well I consider the corporate media covering anything other than useless celebrities and missing white blonde girls as an achievement.

Maybe the swine flu virus will get into Asia and recombine with the local H5N1 there. Nothing like some horizontal gene transfer to make evolution more interesting.

It's reported that the number of new cases of flu A is falling in Mexico.
Also, in Europe, those infected have got it from North-america, so the disease doesn't seem to be spreading rapidly.

I would guess the new flu will die off soon.