Will we "uplift" animals to sapiency? 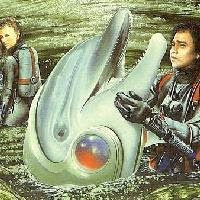 Greetings, oh developing sentient beings! Let me thank George Dvorsky for this opportunity to chatter with his blogizens and answer a few questions -- or else face some of the "reciprocal accountability" of which I am supposedly some kind of champion.

George selected a range of interesting topics, upon which I've arrogated opinions in the past. All are passionately interesting! Though I must keep each day's involvement here quite brief. Alas, life has become frenetic, with speeches and consulting work, my new inventions, and three active kids (the biggest project of all!) Because of this, I am forced to draw some lines, if only to save some time for writing!

So, for starters, those of you who don't know me can view a brief bio at-bottom...or else here. Also see my profile as a public-speaker/pundit. (I'll be appearing in DC and Phoenix, across the next few months.)

Biological uplift describes the act of biologically enhancing nonhuman animals and integrating them into human and/or posthuman society. There is no reason to believe that we won’t some day be able to do so; the same technologies that will someday work to augment the human species could also be applied to other animals. The big questions now have to do with whether or not we should embark on such a project and how we could do so in an ethical and responsible manner.

Recently on his blog, David Brin wrote, “[See] Developmental and ethical considerations for biologically uplifting nonhuman animals,” by George Dvorsky... opining that we humans will soon attempt what I described 30 years ago, when I coined “uplift” in several novels that explored the concept from many angles. George's fascinating paper, might have benefited from more on the sfnal history of the idea. Before me, HG Wells, Cordwainer Smith, and Pierre Boulle depicted humans endowing animals with powers of intelligence and speech - though always in a context of abuse and involuntary servitude. Indeed, those cautionary tales may have helped ensure that it will be done openly and accountably, hence qualifying the tales as "self-preventing prophecies." Allowing me to be the first to ponder "what if we tried to do uplift ethically and well?"

All right. I am not a biologist. My training was in astrophysics and electrical engineering. But, as a science fiction author, I feel liberated to explore any topic, especially if I can gain access to real experts using pizza and beer! Hence, I got to know some people working in research on dolphins and apes. I was also, for a year, the managing editor of the Journal of the Laboratory on Human Cognition (UCSD). So (perhaps arrogantly) I felt free to speculate about humans modifying animals to make them intelligent partners if our civilization.

There are so many issues here. 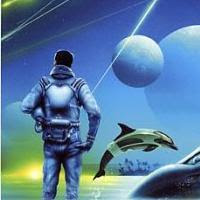 1. Can we replicate - in other creatures or in AI - the stunning way that Homo sapiens outstripped the needs of mere hunter-gathering, to reach levels of mentation that can take us to other planets and invent symphonies and possibly destroy the world? That was one hell of a leap! In Earth I speculated about half a dozen quirky things that might explain that vast overshoot in ability. In my next novel Existence I speculate on a dozen more.

In truth, we just don't know. I frankly think it may be harder than it looks.

2. SHOULD we do such a thing, say, to dolphins or chimps. If someone tried to, they would be hounded and bombed by animal rights people. Even though - if the attempt were successful - the descendants of such apes or cetaceans would be glad it happened. Of course, there would be pain, along the way.

3. That pain and controversy was why I felt I could avoid the simplistic "idiot plot" that sucked in almost every other Uplift author, from Wells to Boulle. The notion that we would abuse or enslave such creatures has some deep metaphorical resonance -- and during a long transition they would not be our peers. But as a goal? A reason to create new beings? It really is kind of pathetic, as are the simplistic tales.

I wanted, instead, to explore what might happen if we took on such a challenge with the BEST of intentions! Wouldn't the new species have problems anyway? Problems that are much more subtle and interesting than mere oppression?

My own artistic fetish is always to show the New Thing being done openly, with all systems of accountability functioning and civilization and citizens fully engaged, aware and intelligently involved. The reason I do this is simple... because absolutely nobody else writing fiction or movies today EVER does that. Ever. At all. Hence, making that assumption always leads in refreshing and original directions.

4. Artistically, of course, it is wonderful to work with characters who come from an uplifted species. I get to stretch my imagination, and the reader's, exploring what sapient dolphins or chimps might feel and think, under the pressure of such development, tugged between both the ancient instincts of their forebears and the new template being imposed upon them by their "patrons."

And that will have to do. I welcome feedback & questions, but there's so little time. If you feel I've neglected you or if you have more to say, feel free to drop in at my own blog CONTRARY BRIN.

David Brin’s bestselling novels, such as EARTH and KILN PEOPLE, have been translated into more than 20 languages. THE POSTMAN was loosely KevinCostnerized in 1998. A scientist and futurist, Brin speaks and consults widely about over-the-horizon social and technological trends. THE TRANSPARENT SOCIETY won the nonfiction Freedom of Speech Award of the American Library Association.
Posted by David Brin at 3/23/2009

Beyond a fictional trope, I don't really see the point of the uplift concept. An uplifted dolphin wouldn't be a talking dolphin, it would just be a synthetic sapience in dolphin shape.

Now, I can certainly see the value in creating synthetic sapients, but why make them doppelgangers of existing proto-sapients?

Here's a comment I found on Mac Tonnies' blog:

I see nothing philosophically wrong with animal uplift, but the concept is freighted with some alarming anthropocentric baggage. "Uplifting" animals to function as peers might sound liberatingly utopian, but the very notion of "peer" suggests, at least to me, beings more or less like ourselves.

As a potential "patron" race, we're bound to project our own preconceptions of personhood onto the animal species in question; our future uplifted friends might very well thank us, but they'll be doing so in a singularly human-like manner (in which case we might be better off poring our energies into the development of sentient machines instead of pretending to be faithful to a given species' zoological source code).

Well-intentioned as they are, proponents of animal uplift labor under the dubious assumption that there's something innately wrong (or at least existentially limiting) about animal-hood. On the other hand, anyone who's had a close relationship with an animal is bound to question such certainty. Sure, it might be nice to jam with my cats about quantum theory, but I sense they're quite content in their feline-hood -- and who am I to deprive them of that?

I'd go so far as to propose that animals are already engaging us in a meaningful dialogue, although perhaps not the sort of dialogue depicted in Brin's canon. That we've yet to understand our fellow mammals on their own terms remains an emasculating reminder that perhaps our "patronage" is neither needed nor desired.

Another issue is long-term potential danger. There's every reason to think that an encounter with an extraterrestrial intelligence would be dangerous; encounters between culturally-different human populations have often been violent, with the more technologically advanced eventually conquering the less advanced, and intelligences who were not even of our own species would be even more alien.

Superior AI will be incorporated into the human mind so that it enhances our own capabilities rather than forming a rival "species". Giving animals the intelligence to build a civilization of their own would inherently mean risking the latter course.

I personally believe the whole idea is flawed. I’m a rationalist and a pragmatist. If I do not have a sufficient reason to peruse something then I would not. I have never understood morality or ethics, my mind does not work along those principles, and I’m perplexed by the term “moral currency”. I would not protest against animal uplift, however I believe we have more pressing concerns. Maybe one day in the far future, if a scientist feels bored then why not.

One of the themes I found fascinating in Brin's Uplift Unvierse is the concept that cetaceans ALREADY have their own civilization and that it is very different from ours. Perhaps, Uplift might be a way for us to communicate - truly communicate - with dolphins or chimps, understanding there world view? I think Brin's Uplift concept is done with the idea of expanding the "client" species' minds - making tools that dolphins could use to compensate for the lack of hands/opposable thumbs... Humans tend to project our concepts onto everything with which we interact, so it's perhaps inevitable that our ideas would be imposed on the client races, at least at first. The very existence of the USA is proof that people can and do change their patterns of thought.

As someone who worked with Akeakamai, the real dolphin who became a character in Startide Rising I feel I can comment on how different dolphins are. One example. We had a play choice experiment where we showed the dolphin two toys, she picked one and we gave it to her. She HATED it. One day we accidentally gave her the toy she had NOT picked...and she loved it. Given a binary choice she indicated the option she did not want. Totally valid, totally arbitrary, and it took the monkey-boys months to notice.
Brian Tarbox