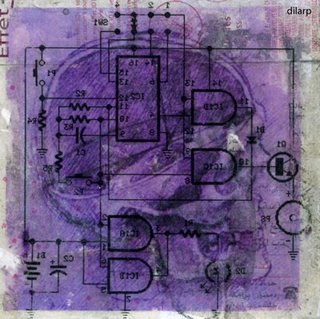 Last year in Toronto [2003], as an outgrowth of their PhD research into biofeedback, cyborgs James Fung and Corey Manders used EEG (brainwave) technology to give a concert in which audience members collectively and unconsciously created music with their minds. Called "DECONcert: Regenerative Music in the Key of EEG," the result was an experimental and jazz-like form of music that placed human beings into the feedback loop of a computational artistic process.

To some, such work might seem fringe, the sort of science-meets-art that excites hackers, nerds and nobody else. But to me, DECONcert was a sign of just how close we are to a new era of art, one in which developing brain technologies open the door for new forms of artistic expression in which human consciousness and subjective experience become a canvas unto themselves.

In his 1968 sci-fi classic, Do Androids Dream of Electric Sheep, Philip K. Dick envisioned a machine called the "mood organ" that allowed users to dial-in their desired emotional states and, through some sort of techno-voodoo, achieve it. Around the same time, Isaac Asimov, in his Foundation series, envisioned a device he called the "Visi-Sonor" that could also stimulate emotions directly. And in 1970, writing in Ringworld, Larry Niven described the "tasp," a device that could induce a current in the pleasure center of the brain from a distance.

As with all great science fiction, these works made prescient predictions. Recent insight into the workings of the brain and the development of promising neurotechnologies are showing that mood organs and similar devices are theoretically feasible. Given the pace of scientific development this century, I believe that these types of devices should soon be within our grasp, and along with them new modes of artistic expression and experience.

From fiction to fact

Of course, what I'm talking about is in some ways nothing new. People have tried to manipulate their brain and emotional state for thousands of years—witness the recent discovery of ancient brew in China. These include indirect techniques such as taking drugs and alcohol and direct techniques such as psychosurgery—there is evidence of trephining from Neolithic times. Psychiatric shock therapy, which is still used to treat undesirable psychologies and mental illness, falls somewhere in between.

These, however, are crude attempts at cognitive control, with patients often not surviving procedures, or suffering adverse changes to personality. So are mood organs and their ilk actually possible, or will they forever be relegated to science fiction?

Theoretically, they are possible, and evidence suggests that they are also technically feasible.

At the physical level, emotions appear to be regulated through the amygdala, located deep inside the brain in the medial temporal lobe. The amygdala comprises several separately functioning nuclei, which are essentially electrical signal transit points. These components are necessary for fear conditioning, emotional arousal, smell and pheromone processing. It is the amygdala that induces changes in neuromodulator levels. In other words, if you can regulate the amygdala and its associated components, you can control emotions.

Easier said than done, of course, but there are a number of ways in which this could be accomplished.

So-called "brain jacks" would be the most direct route. External stimulation would be exceedingly challenging because the amygdala is fairly deep in the brain. As depicted in cyberpunk novels and films—perhaps most famously in The Matrix—a brain jack seamlessly interfaces the brain with a machine.

Given sophisticated neural and computer science, a brain jack could tap into the sensory cortex and feed the brain all the data it currently receives through sensory inputs. There is nothing in the analog arena that cannot be converted into digitized or computational form for eventual processing in the brain.

Another way would be to install small liquid perfusion pumps that distribute neuromodulators across the brain in the appropriate sequence and amounts, but this is an inelegant and brute force engineering solution.

Essentially, the major difficulties to any of this are figuring out where to put the electrodes or pumps and what electrical dynamics, chemical dynamics or combination thereof are required to generate the appropriate patterns to get the desired response. It's safe to assume that such a feat won't be possible without sophisticated technologies, including intelligent computer control systems, microsurgery and possibly even molecular nanotechnology—not to mention the complete mapping of the human brain.

But believe it or not, there are already devices in existence that, at a rudimentary level, perform similar tasks.

Texas-based Cyberonics, for example, recently developed the Vagus Nerve Stimulator (VNS). VNS provides seizure control for epilepsy patients using an implanted cardiac pacemaker-like device connected to the vagus nerve in the neck. Once in place, the device can be set to emit electronic pulses to the vagus nerve at preset intervals and levels. Studies have shown that approximately 50% of epileptics treated in this fashion have significant seizure reduction.

Researchers working on VNS also unexpectedly discovered that stimulating the vagus nerve in this way stimulated brain regions believed to control emotions. Essentially, VNS devices could be used as implanted emotion management "pacemakers." So, unsurprisingly, VNS is now being considered for treating depression.

There are also noninvasive approaches that show promise—devices that would make Dr. McCoy from Star Trek jealous. Transcranial magnetic stimulation (TMS) is one such remarkable technique currently under development. TMS uses pulsed magnetic fields to produce an electrical effect. Initially developed as a diagnostic aid for neurologists, TMS devices can stimulate motor regions of the brain, inducing a twitch of the thumb that tells a neurologist that particular nerve pathways are intact. Apparently free of serious side-effects, TMS can also affect brain areas involved in visual perception, memory, reaction time, speech and mood.

Where might VNS, TMS, liquid perfusion pumps and brain jacks eventually lead? Quite obviously, potential applications lie across the board. But from the creative and recreational perspectives, the possibilities are quite fascinating.

Today, artists are somewhat limited in their ability to go deeper inside a person's psyche and elicit an absolutely predetermined response. This limitation is set to change with the advent of sophisticated psychological control devices. In the future, artists will be able to perform not only on a canvas or musical instrument, but in the consciousness of the audience itself.

Art has always been about transcending the individual and sharing the subjective experience of others. The greatest artists thrill us with their stories, endow us with emotional and interpersonal insight, and fill us with joy through beautiful melodies, paintings and dance. By doing so they give us a piece of their selves and allow us to venture inside their very minds—even if just for a little bit. In the future, we'll allow them to go even deeper into ours.

I was wondering if you could comment on psychedelics from your professional points of view...
Do you think it is acceptable when governments try to control states of mind of individuals in a society? And what about when these altered states of mind become accessible through some neurological techniques that might be just around the corner... ?

This is a tough question. I'm a firm believer in cognitive liberty, but I recognize that some people have to be protected from themselves. Hard drugs clearly ruin lives and introduce devastating negative long-term side-effects.

I'm somewhat partial to the suggestion that people should be allowed access to psychedelics after a certain age, say 50 or 60. After this point, individuals deserve the liberty to manipulate their conscious awareness as they see fit.