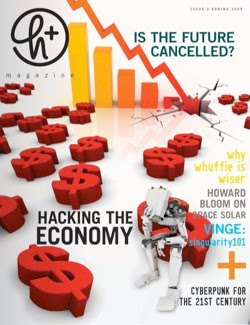 The spring edition of h+ magazine has been released. You can download it for free.

Has the future been canceled?

Rising up out of the gloom of early 2009, the second edition of h+ magazine sends a message of hope to weary changesurfers.

h+ #2 takes on the mess in front of us and then catapults us further on and further out.

And for those of you who prefer your futurism gritty, we have John Shirley on Cyberpunk for the 21st Century and Paul McEnery talking to "BioGunk" SF writer Peter Watts.

In my humble opinion, this is the most fully realized edition of a periodical that I have been involved in since the glory days of Mondo 2000 in the early '90s. Really, when's the last time you saw a magazine that deserves to be read front to back? Seriously, check it out.

And that's not all. For those of you - like me - who love the feel of a good old-fashioned print magazine in your hands, we are printing a limited number that will be available on some magazine stands and directly through us.

h+ covers technological, scientific, and cultural trends that are changing — and will change — human beings in fundamental ways. We will be following developments in areas like NBIC (nano-bio-info-cog), longevity, performance enhancement and self-modification, Virtual Reality, "The Singularity," and other areas that both promise and threaten to radically alter our lives and our view of the world and ourselves.

More than that, h+ aims to reflect this newest edge culture by featuring creative expressions of humanity on a razor's edge where daily life and science fiction seem to be merging.
Posted by George at 2/27/2009