Matter and Beyond explores transhumanism [video] 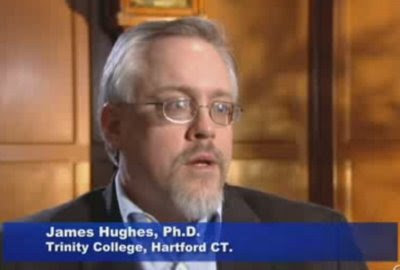 Matter and Beyond, an online TV show that explores the intersection of science and spirituality, has produced an episode on transhumanism that features IEET Executive Director James Hughes and renowned physicist Freeman Dyson. The 30-minute video covers such topics as human trait selection, performance enhancement and artificial wombs.

From our ancient myths that included stories about Greek gods such as Zeus, to modern day superhuman heroes such as the bionic woman, Superman and Batman, human beings have been fascinated with the idea of being more than a mere mortal.

Transhumanism is a discipline that is concerned with the social and scientific implications of overcoming human limitations. It is now possible, with the use of technological and bio-medical innovations, to live longer, be stronger and transcend the limitations that human beings have faced since the beginning of existence. But what are the moral and ethical implications?

From steroids to designer babies to artificial wombs, our leading thinkers discuss the ethical and moral implications of bio-technology and nanotechnology. Dr. Gayle Woloschak Woloschak questions whether technologies and pharmaceuticals that enhance human abilities be available to people who don’t necessarily need them for therapeutic use – but rather simply to be stronger – as in the case of steroid use. And while we are in the process of developing bio-medical techniques that allow us to order up any kind of baby we desire, Ethicist Dr. Freeman Dyson believes we may be going too far. He points out that some people would be willing to spend any amount of money and use any means necessary to order exactly the kind of baby they desire. While some have viewed that there are obvious natural limits to what human beings should do with their biology or their brains, Ethicist Dr. James Hughes points out that the view of these natural limits has shifted historically – as in the case of invitro fertilization which 30 years ago was known as ‘test tube” babies is now considered a common practice. Join us for a fascinating look at the exciting possibilities and some terrifying concerns arising out of innnovations in biotechnology.