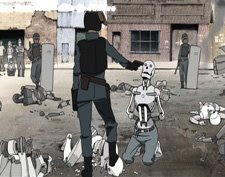 Considerable buzz emerged at last year's Singularity Summit after the talk given by IEET Fellow Marshall Brain who spoke on the inevitable structural unemployment that automation and artificial intelligence will create.

The astonishing thing about Marshall’s talk was the amount of outrage from the libertopians in the audience who were all perfectly content to imagine that we would soon have super-robots doing things a gazillion times better than humans, and that that transition might wipe humans out or bring about a utopian society, but they couldn’t accept that such a transition might cause unemployment and require any redistribution of the wealth. History apparently shows that the market solves all structural unemployment, even after an historical discontinuity so radical that we make up a word for it - Singularity - which precisely means that we can’t predict anything after that point. Libertopians would be funny if they hadn’t just ruined the world economy.

Like Dr. J, I was shocked by the largely negative and skeptical response to Brain's suggestion. I had largely assumed -- and now I'm guessing quite wrongly -- that most forward-looking people were in favor of mass-automation and the introduction of permanent human retirement (if I can borrow Hans Moravec's phrase).

But now that I think about it, this response actually makes sense: such an outcome is an affront to libertarian minarchism. They know that you can't have mass unemployment and a weak state apparatus. Unlike us lefty futurists who have been anticipating a work-free future for some time now, libertarians aren't too happy about the idea of having to institute a guaranteed universal income to deal with massive unemployment. But then again, their predecessors weren't very happy with the introduction of the welfare state in the early part of the 20th century, either -- a rather necessary government solution to growing problems that were caused by the maturing nation state and industrial economy.

I agree there were some poorly reasoned ideological objections raised after that talk, but you get odd people and obscure ideologues in crowds. Famous libertarians such as Milton Friedman, Friedrich Hayek, and Charles Murray all supported basic incomes/the welfare state. The leading libertarianish-transhumanists (e.g. Peter Thiel and Eliezer Yudkowsky) also agree that automation will drive wages below human subsistence levels and support redistribution to enable human survival (with the possible exception of Robin Hanson).

Also, I'd note that the claim that 'libertopians' were responsible for the recent financial crisis is highly dubious. The proximate cause was a bipartisan effort to boost homeownership among people with bad credit and no money for downpayments: Bush wanted the Republicans to make inroads with minorities, while Democrats (including Obama, and Clinton when he was president) were cheerleading increased minority homeownership, as they usually do. The government-sponsored corporations were politically pressured to make the market in securitized high-risk mortgages, etc, etc.

When I was in (an extremely progressive) law school, our legal writing class's mock pro bono assignment was helping a nonprofit organization enable minority homebuyers to purchase homes without down-payments. Prestigious professors argued that down-payments and the use of credit scores constituted 'structural racism.' James' attribution of events to marginal libertarians, as opposed to those who were actually cheerleading and facilitating the creation of the mortgage house of cards, doesn't seem like truth-seeking to me.

Moving beyond the specifics of the mortgage bubble, the flood of savings from China and East Asia, combined with extensive U.S. deficit spending, helped to create a broader pressure for bubbles and overleverage, but it would be quite difficult to attribute that to libertarians.

I'm all for limiting the role of the state. For example, I argue strongly in favour of the Millian harm principle: I think there's scope for massive and continuing law reform to remove criminal prohibitions that have no good justification. But that limited role must include the provision of an economic safety net, which must be paid for by taxes of some kind.

The state has proved to be reasonably successful as an institution to protect us from internal and external violence, its primary Hobbesian function. But it has also been quite successful in modern times at ensuring that most people have enough resources to survive, and to go out into society without suffering the extremes of shame. Hobbes himself knew that the state would need to fill that sort of role - no one could be expected to sign up for the social contract, including the enforcement mechanism of the state, if it meant starvation.

All that aside, one of the big debates in real-world "practical" (scare quotes are useful here) politics is about the supposed need to increase the fertility rate in Western countries, so that there are enough economically productive people around to finance the health and social security needs of baby boomers like me ... when we become old, retired, and increasingly frail and demanding of health resources. This whole debate never seems to connect, as it clearly should, with the automation debate. If we do increase fertility, all those Generation Z's may be out of work because the jobs are taken by robots!

Actually, there may be jobs there. There may be more and more elaborate personal services that can be supplied only by human beings (at least until robots and human beings are indistinguishable). But that's kind of beside the point. The point that I see is that the current scare over declining fertility really is a scare. What matters is whether there's sufficient economic productivity to provide sufficient goods and services to the entire population. I see no reason why not. Actually providing them might require economic redistributions, something that the state apparatus does reasonably well in most Western countries.

I find it almost impossible to imagine the mindset that thinks the provision of a socio-economic safety net is a bad thing, but of course right-libertarians tend to start with various axioms that I don't accept, and which strike me as arbitrary.

This post is why I started reading your stuff on a regular basis.

For some reason libertarians and conservatives don't complain about the shameful multi-generational dependency on inherited wealth and privilege displayed by people in America's ruling class, most notably the former president who has just moved back to Texas. I detect some class snobbery at work here: The "right people" deserve guaranteed incomes and positions they haven't earned just because they have successful ancestors; but not the overwhelming majority of people from the gutter, even though many libertarians hail from the gutter themselves.

What matters is whether there's sufficient economic productivity to provide sufficient goods and services to the entire population. I see no reason why not. Actually providing them might require economic redistributions, something that the state apparatus does reasonably well in most Western countries.

With talk like that, you'll never be able to convince people you're a "fiscal conservative" (well, not if the people in question belong to the Fox News set).

Blake, real fiscal conservatives are people who think hard before wasting taxpayers' money on foreign wars or on futile (and hideously expensive) "Wars on Drugs" and such.

I'm very happy to save taxpayers' money wherever I can. I'm also happy to spend it on perfectly good programs to provide for a social safety net, educational opportunities for all, and so on.

If robots were only used for labor in off-world colonies there wouldn't be an unemployment problem as the human populations of the colonies would be low. Unfortunately that won't happen.

The main reason that I disagree with Marshal Brain's automated economy theory is that I believe his view of the facts and his analysis of those facts is wrong and his conclusion is wrong.

I find the prediction and case that wages will be driven below human subsistence levels not sufficiently supported.

As was noted at the event. The levels of employment in agriculture went way down over 100 years in many countries but overall employment and wages went up.

Incorrect business practice and government policies can cause financial crisis.

Sub-prime mortgages were part of the problem. But the entire residential housing market in the USA was 80 million homes times $250,000. $20 trillion. 5-10% foreclosure defaults would be $2 trillion max.
But it was the creation and overuse of credit swaps that have made this such a large problem.

Credit swaps became a $50 trillion market that was not supported by what was the underlying assets. the evolution of this market

Is described in articles at the wall street journal and Washington Post
http://online.wsj.com/article/SB122538449722784635.html

There was systemic lack of due diligence in both mortgages and the credit swap financial instruments.

If X were valid for the future based on underlying cause Y then it is consistent with what has happened in the past based and differing levels of Y.

@BW Comparing the united states to any other industrialized country is misleading. Virtually every other industrialized first world country has a Mixed Economy and numerous protective laws to prevent foreign interests from damaging their economies. The only real commonality between those countries and the United States is our (Residual) Wealth. Wealth that came from our unique role in World War Two as the country least damaged by the war infrastructurally or politically. In fact, a look at our past as a proudly Capitalist Nation shows that we are more than willing to throw human lives away in order to maintain profit margins.