This article was originally published on August 12, 2006. 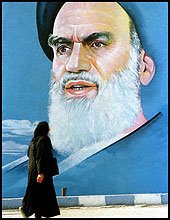 George W. Bush has caused quite a row with his recent ‘Islamic fascism’ remark. The neo-cons are quite obviously establishing the ideological parameters within which they are continuing their propaganda campaign and maintaining the American public’s high level of agitation and fear. In the process, Bush has grossly over-simplified both the nature of current geopolitics and the religion of Islam itself. Quite justifiably, a number of Muslims are quite upset with Bush’s rather sweeping and inconsiderate remarks.

That said, there are some underlying truths to the characterization of radical Islam as a fascistic ideology (again, I take great pains to distinguish between Islamic fundamentalism and the more commonly recognized benign and mainstream variant of Islam). The rise of fanatical theocracies (Ahmadinejad’s Iran) and extremist non-state actors (al-Qaeda) have the indelible marks of far-right totalitarian politics.

And I’m hardly alone on this one. Earlier this year, for example, a number of prominent intellectuals published a statement in condemnation of what they regarded as the rise of Islamic totalitarianism. The list of thinkers who signed this statement included Salmon Rushdie, French philosopher Bernard Henri-Levy and exiled Bangladeshi writer Taslima Nasreen. In the statement, they wrote that "After having overcome fascism, Nazism and Stalinism, the world now faces a new global threat: Islamism…We, writers, journalists, intellectuals, call for resistance to religious totalitarianism and for the promotion of freedom, equal opportunity and secular values for all."

Rushdie et al are correct in their assertion that radical Islam has the characteristics of a totalitarian ideology, but I believe they have understated its fascistic elements.

Many people have the idea that fascism is the monopoly of white supremacist types. This is not the case. At its core, fascism describes the rise of a self-identified group that has grossly exaggerated its historical and societal significance. This self-identity, which typically manifests as a sense of superiority or shared destiny, can encompass anything from race, nationhood, religion, and a shared cultural heritage.

As historian Allan Cassels noted in his book, Fascism, virtually every nation has what is referred to a pre-fascist culture. For the early 20th century Germans, they identified with their race, the volk, and their mythical 'glorious' past. At the same time, many other European nations experimented with fascism, including Italy, Spain, England and even the United States.

Today, this pre-fascist culture is weak in liberal society, but it is rearing its ugly head in some of the Islamic nations. Al-Qaeda, for example, is a paramilitary organization with the stated task of reducing the outside influence of Islamic affairs. This is very much an example of cultural xenophobia and an overstated sense of social mission. Like the fascists of 20th century Europe who feared the specter of Bolshevik globalization, many Muslims today fear the encroachment of American and Jewish values. The result is a far-right, exclusionary, militaristic, and hyper-sensitive counter-reaction in the form of fascism.

Which leads to the next indelible characteristic of fascism: a common enemy. The racist Nazis rallied the nation to deal with what they considered to be the Jewish problem. The Jews were an identifiable enemy who could be blamed for all the problems of the state. They also targeted the Bolsheviks, whose extreme left position polarized and radicalized the right even further. Today, the Jews have once again been targeted by a far-right group, this time in the Mid East—but now they have been joined by the Americans (whose capitalist imperialism and social liberalism has taken the place of communism).

Other characteristics of fascism include a charismatic and populist leader, which Iran quite clearly has in President Mahmoud Ahmadinejad. What’s particularly frightening is that Ahmadinejad clearly believes his own hype. He is not so much a dictator as he is an ideologue.

By hype I mean ideology--or in this case, theological ideology. And in this sense Islamic totalitarianism is distinguished from the more secular or socialistic forms of totalitarianism. Where Marxism and fascism had ideologies informed by political, philosophical, and even (pseudo)scientific texts, radical Islam is a theocratic framework that draws its authority from religious sources.

It’s a fine point, but it’s worth mentioning. Islamic totalitarianism, while arguably far-right, is an ideological horse of a different colour. What it shares with more traditional notions of totalitarianism, however, is that is that the source of authority does not come from one individual or group of individuals (i.e. authoritarianism), but instead emanates from a monopolistic ideological framework that is enforced as the only true law of the land.

Indeed, democracy, due process and other elements of social justice as we know it in liberal democracies are absent in countries like Iran and the former Taliban Afghanistan. The goal of these theocracies is to embed religious ideology across the land and to maintain a monopoly on all ideas and institutions; radical Islam, like any totalitarian ideology, is enforced as the alpha and omega of personal existence (the state regulates nearly every aspect of public and private behavior). In this sense the revolution that is Islamic totalitarianism is comparable to the Stalinization of the Soviet Union and the work of the Nazis in 1930’s Germany. The Soviets tried to create a worker's utopia and the New Man, while the Nazis worked to ensure racial purity and create a 1,000 year Reich; Islamic fundamentalists want to create a heaven on earth – a phenomenon comparable to the quasi-totalitarian and theocratic efforts of the Calvinists in 16th century Geneva.

As for the Islamic revolution, one example that will forever stand out in my mind is when the Taliban destroyed Afghanistan’s Buddhist statues. This was an explicitly revolutionary act against those ideas and institutions that potentially rivaled the tenants of the ruling ideology; all revolutions seek to destroy the past, and this one is no different. Another example of zero tolerance toward opposing viewpoints was the recent row over the caricatures of the Prophet Mohammed in the Danish daily newspaper Jyllands-Posten. Western notions of free expression and the free press are lost on the theologues.

So, while Bush and the neo-cons wage their obverse Christian crusade against the ‘Islamic fascists’, they have (likely unintentionally) revealed a disturbing aspect of extremist politics in the Middle East. And as each side continues to antagonize each other, modern politics migrates further and further into the extreme fringes.

Here's a poem by Mohammed Omar (a swedish magasine editor and muslim) for concideration, my own quick translation.

Everything points to
that the muslims are taking over the world.

And the problem with the danish newspaper was not that it was a vigilant defender of free speech, it was an obvious provocation for no other reason than to be able to play martyrs later.