Ignatieff and Obama: Intellectuals on the rise 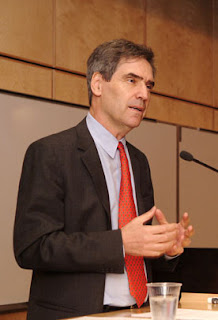 Left-wing intellectual icon Michael Ignatieff has taken the helm of the federal Liberal party in Canada. Given the current political crisis in Canada, and given that the Liberals have now solved their leadership problem, Ignatieff is poised to become the country's next Prime Minister -- something that could happen as early as January should Parliament go ahead with a non-confidence motion.

Though he could hardly be called Canada's Obama, the parallels between the two men and the two countries are interesting. Currently, both Canada and the United States are governed by heads-of-state who are ultra-conservative and populist and who allow their religious views to influence public policy. Both Stephen Harper and George W. Bush have caused great divisiveness in their respective countries and gone out of their way to alienate entire swaths of the citizenry. And neither Harper or Bush have instilled any real sense of confidence about their ability to govern; these are administrations in which inaction reigns and where egg-heads are strictly forbidden.

In Canada, Harper's work of late has been particularly infuriating. He recently appointed the conservative populist Preston Manning, a Creationist and member of the Christian and Missionary Alliance, to his scientific advisory board. Harper continues to govern in utter denial of the current climate crisis, contributing to Canada's track record as one of the world's worst polluters and green house gas emitters. And most recently, in an attempt to save himself and his party, he reopened the national unity debate by accusing the Coalition of going to bed with the "separatist" Bloc Quebecois -- this after Harper depended on the Bloc to prop him up during the last 3 years of minority rule.

Consequently, it's reassuring to see both Canada and the U.S. poised to bring in leaders with roots in academia -- incoming leaders who are engaged in public discourse and who have the requisite qualifications to lead their countries. In the case of the U.S. it's a done deal; as for Canadians it's still within the realm of wishful thinking.

Obama and Ignatieff certainly have the creds. Both leaders have ties to Harvard University: Obama is a graduate of its law school and Ignatieff the former director of Harvard's Carr Center for Human Rights Policy (it's also where he earned his PhD in history). Ignatieff also spent time at Oxford and the University of Toronto where he was a visiting professor and senior fellow of the Munk Centre for International Studies.

In his teaching and writing, Ignatieff has addressed such topics as Canadian culture and human rights (on moral issues he maintains that Canadian law is secular and liberal, approximating European standards more closely than American ones), international affairs (he was very critical of the limited-risk approach practiced by NATO in conflicts like the Kosovo War and the Rwandan Genocide), and the so-called 'lesser evil' approach in which he has argued that Western democracies may have to resort to indefinite detention of suspects, coercive interrogations, targeted assassinations, and pre-emptive wars in order to combat the greater evil of terrorism (Ignatieff has since toned down his position, likely out of political necessity).

I don't imagine that all Canadians will agree with his positions (myself included), or that they'll even care that he is an internationally recognized intellectual. But there's no denying that in Ignatieff the Liberals have found a unique leader who is poised to give the party a significant boost.

Not to mention the distinction he would return to the position of Prime Minister should he get there.
Posted by George at 12/10/2008

I'm not sure it's correct to place him on the left wing. The Liberals are a decidedly centrist party, occasionally falling slightly to the right or left of centre.

Dion was certainly left of centre, but as an Iraq war apologist I don't think Ignatieff really is.

We shall see, I suppose.