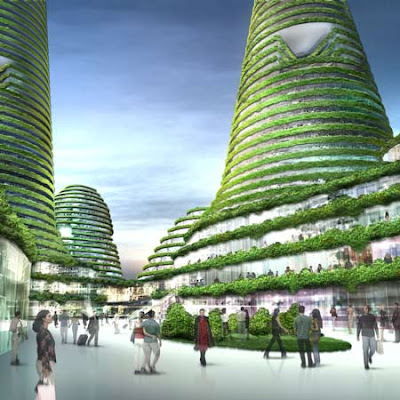 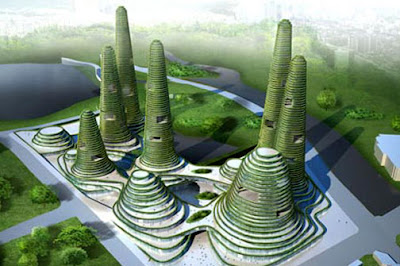 A proposed city in South Korea, Gwanggyo, will feature hill-shaped buildings, with hedges planted on the terraces and roofs, to improve ventilation and reduce energy use.

The design will be one of two centres envisioned for the future new town, a self sufficient city of 77,000 inhabitants located 35 km south of Seoul.

Who would want to live in a chia pet?

How more phallic can you get?

Anonymous, that's exactly what I was thinking! Incorporate the technology, but there's no excuse for having it be fugly.

That's a beautiful concept, but wouldn't there be a problem with the thousands of birds and other creatures who would want to live in the hedges and rain their rather unsanitary byproducts down onto the Green City? I foresee some kind of Jurassic Park, "unforeseen consequences of complex systems" scenario playing out here. Nature's a bitch, ain't she?

Without the animals, you cannot have healthy, self-sustaining soil. The birds and other small creatures living in the terraced hedges would be a boon to this community's self-sustainability. So it's ugly, at least they'll be alive long after our unsustainable cities and suburbs die off.

this is damn UGLY!!!