The waste that is terrorism 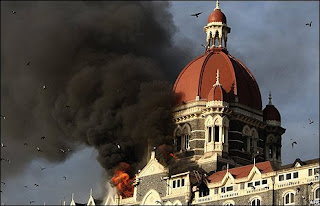 Over 100 dead in Mumbai and the death toll is expected to rise. Terrorists have struck yet again -- and for what? What is it exactly that they hope to achieve with these tactics?

Actually, the answer is quite simple: they're working to create chaos. Ultimately, paramilitary groups are hoping to destabilize regimes to the point where they'll cave to their demands.

And given the fact that these organizations often lack the resources to launch an all-out assault and attack military targets, they do the only thing they can do: attack those who cannot defend themselves.

In the case of the recent attacks in Mumbai, the terrorists chose high profile sites and targeted tourists (particularly Westerners). By doing so they hoped to attract an international audience and draw attention to their cause. They're also trying to rattle some political cages; if this organization is indeed a Muslim paramilitary group, it may be working to increase tensions between India and Pakistan.

But what organizations like these fail to realize is that terrorism simply does not work. Terrorist groups very rarely achieve their political objectives. Blowing up buildings and killing innocent civilians does not result in the kinds of changes they're hoping for. If anything, it causes target governments to retrench and dig their heels even further.

Which makes complete sense. Government are supposed to represent and protect its civilians. Consequently, countries will never make policy concessions to these groups -- even when their own people are being targeted.

Terrorism is a tool for the desperate. It's for those who feel that they have to resort to violence in order to exert any kind of political will. In a way it's a sign of defeat; the message is loud and clear: We don't have the means to get what we want so we'll resort to nihilism.

In the end, terrorist groups who attack innocent civilians fail, while leaving a bloody trail behind them. And it doesn't matter who or what is being targeted or the scale.

That of course depends on what definition of terrorism you use. It might be true for the common 'everything the USA doesn't do', but destabilizing the elected Sandanista regime in Nicaragua for example worked out quite fine by funding terrorist paramilitary groups. (a.k.a The iran-contra affair)

Totally agree with you George.

In essence, it's nothing more than an extreme version of a child having a tantrum.

Immature minds causing destruction because they can't get their own way.

It also depends on how much support the terrorists have among a victimized minority of the population. If, for example, the persecuted minority amount to 25% or more of the population and normal democratic procedures have failed, then they may well provide support to the terrorists. The ruling majority cannot jail or exterminate them all, unless they consider ethnic cleansing acceptable.
So, to stop the terrorism, they eventually have to come to some agreement and stop persecuting a large proportion of their population.

Terrorism is a methodology, one that many different kinds of actors (state and otherwise) can undertake. Most guerrillas shade into terror from time to time, and many organizations (e.g. Hamas) with acknowledged practice of terror tactics also resist in a variety of ways that cannot be called terrorist. Just because the people to attacked an Israeli military outpost were Hamas does not make it terrorist; indeed, military targets are the classic "fair game" target. Ditto Lebanon bombings etc. That said, there is a moral difference between those who try to avoid being terrorists but aren't always able to exert the group discipline necessary, and those who feel that entire populations are fair game for ideological reasons. In war, civilians will be killed, but if those doing the killing intended that result, it's a war crime. In fact, if those doing the killing failed to take appropriate steps to minimize civilian casualties, that is *also* a war crime. Most nation-states, realizing that these practices are not in their self-interest anyway, are usually quite happy to try to live up to those basic standards. Of course, nation states that depart from that practice, or fail to keep it well, have tremendous power to cause pain and suffering, far outstripping any terror organization.

So, what do the terrorists in Mumbai hope for? How about tensions, or even war between Pakistan and India? It looks like they very much might win their objectives in that respect. It's a nihilistic hope, held by people for whom the current state offers nothing of value. That state must be discredited, according to this mindset, undermined to the point of violent dissolution, so that their alternative is the last ideology standing.

Of course, older terror organizations like the PLO or the IRA believed in order in the world, wreaking their disorder in a much more constricted context. Modern takfiris, on the other hand, seem to regard the entire modern world as worthy of dissolution. That is rather more frightening.

The goal is not just tensions between India and Pakistan but to pull Pakistan soldiers that are working to fight extremist Islamists in the border region of Pakistan/Afghanistan over to the Indian Border.

The terrorists have political goals to create Islamic states and to get rid of the elites ruling countries like Saudi Arabia.

Toppling Pakistans government and sending it the way of Iran with Islamic religious rule would get Islamists nuclear weapons. (Potentially sooner than Iran making them)