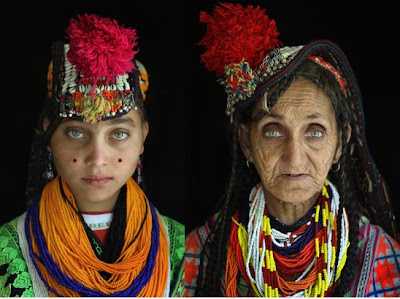 You know going to visit an old person's home or visiting a hospital ward for the elderly has a *much* bigger horror impact than going to a funeral.

We were not meant to live like this. Not this.

Those who think death is the worst of it, have not grasped the true perversity of the universe.

That is the true horror

when I was working in crisis intervention, I experienced the homes for those abandoned to end times; seemed like an existential limbo, before lights out

I am not sure what we are meant for, but, I know we can do better than just going with the flow on this one; there seems to be no grace, as far as I am concerned, with dementia

this picture is worth one word: transhumanism

Is this the same person that's been photo shopped?

No, it's a real, unaltered photograph.

What though the radiance which was once so bright/ Be now for ever taken from my sight,/ Though nothing can bring back the hour/ Of splendour in the grass, of glory in the flower.

Is it a photo of a granddaughter and grandmother, or a photo of the same person years apart?

I don't know, but apparently it's an unmodified photo, so your guess that it's a grand-daughter and her grandmother may be correct.