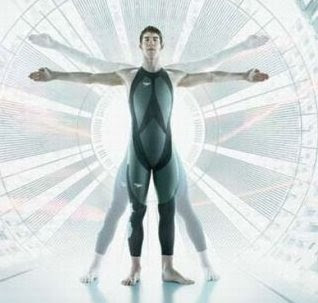 Q: What is the qualitative difference between this sort of technological enhancement and pharmacologically endowed enhancement?
Posted by George at 8/13/2008

The difference is the amount of commitment. On one hand the enhancement involves putting on a suit. On the other, it involves a pharmacological arms race (a pun!) where to compete athletes have to ingest drugs that might harm them.

Both enhancements pressure athletes to get the latest enhancements, but the level of commitment, and the downsides are different.

In one you have to take a few minutes to zip up a huge body suit, and a few minutes to unzip yourself out of it, in the other you sacrifice more than just a few moments to put on/take off a swimsuit.

I think the idea is that this is just a suit, you can take it off, whereas pharmacological enhancement sets us on the slippery slope to becoming other than human. Many fear that at that point our current social contracts and norms will evaporate.

Some differences as I see them:
1) it's safe and with no side-effects
2) relatively low cost and high degree of accessibility and acceptability
3) allows athletes to perform at a higher level

"...pharmacological enhancement sets us on the slippery slope to becoming other than human."

And just what is the morally-relevant definition of "human"? (My cuticles are human in some sense, but clipping them is not morally equivalent to murder) What sort of pharmacological enhancement would ablate our humanity *in a morally-important respect*? Insofar as we agree that the details of our bodily instantiation are distal to what makes us human (again, in the morally-relevant sense), then it would seem that only things that impact our consciousness can affect/effect our humanity.

@nato Well, again, I think the idea is that as we move further away from our natural (think Amish) way of life and become part, brain and body, of science, it will become increasingly obvious that just as magic, God and souls have no reality external to us, neither do things like morals, responsibility and personhood.

In the case of performance enhancing drugs in sports I suppose the fear is that we would start thinking of self-discipline as a system (prefrontal innervation of the dopaminergic midbrain) to be fortified rather than a virtue to be cultivated.

And who knows what it would be like to have sport anchors discussing a runner's frontal lobes as if they were an engine? Many people (going all the way back to Spinoza) feel that would be incompatible with thinking of him or her as a person. Personally I'm not so sure.

"...it will become increasingly obvious that just as magic, God and souls have no reality external to us, neither do things like morals, responsibility and personhood."

I presume that by repeating this idea, Christopher, you don't mean to endorse it, but nonetheless allow me to inveigh against this pernicious fallacy. One must grant that there are ontological classes for which morals, or personhood, do not qualify, but this would seem to also include things like words or even, in many respects, numbers. Certainly a number does not have the same kinds of properties as fundamental concreta such as electrons*, and words(signs), which Saussure divides even as abstracta into signifiers and signifieds. So, numbers, words and persons do not, in some sense, exist. In fact, it would seem that everything about which we care most does not fit that ontological category. Should we be worried that none of our cares turn out to be concreta, and are thus somehow negated? I don't see why we would, since our cares themselves are not concreta. It seems perfectly consistent for us to concern our (abstract) selves with concreta only insofar as they are relevant to the abstracta about which we care. By this reading, 'real' (meaning non-abstracta) things have no intrinsic importance except that they are the substrate of representation.

By this I don't wish to imply something silly like the physical world of concreta is unimportant or uninteresting, but rather to puncture the (to me) quite curious assumption that if we are able to "reduce" people to (immensely complex) dynamical systems** then we have eliminated their reality. Similarly, if we insist that there's no such thing as "life" unless we find some vital substance so that we can label "life" a concretum, then of course there's no such thing as life. One can either continue to insist on the relevance of such unhelpful ontological categories or one can recognize them as appropriate only to specific contexts. It's obvious where I stand.

*That said, it's not impossible that logical space is contiguous with the instantiated physical universe which we see, and that the apparent difference between abstracta and concreta is a function of human perception.

** One might be tempted to say "dynamical systems of relations", but humans are something ongoing and always changing, like a river. If we defined a river as 'a long stretch of contiguous water', one might get confused and think that if the same riverbed is filled with different water, that it is now a different river. Similarly, humans are not a particular set of relations, but rather a system of continually-altering relations of semi-contiguous dynamic form.

@nato Words and numbers are too useful to throw aside. But just as the Christian world view is succumbing to scepticism and secularism, so the prevailing humanist world view may not survive a confrontation with genuine understanding and thorough manipulation of the organ formerly known as the mind. I'm not one of those who want to avoid such a confrontation, but I am troubled by the wishful, superstitious and self-glorifying excuse of an existentialism we are fed with in this quasi-religious culture of ours. I think a lot of people's cherished humanist values and beliefs are in for a very rough ride. No wonder that they stick their heads in the sand and label biomedical enhancement a sin.

I actually think most of the really worthwhile things about Christian ethics have survived the collision with humanism quite well, and am optimistic that the worthwhile parts of humanist ethics will come through the future intact as well.

What do you think George?