Gee, do you think the Russian invasion of Georgia was timed to coincide with the Olympics? 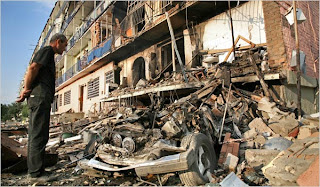 With billions of people distracted by the Olympics it was a perfect opportunity for the Russians to instigate one of the most significant geopolitical events seen thus far in the 21st century.

And I'm not the only one who thinks so.

It's obvious that the Russians don't want to let Georgia slip away. It's an extremely important conduit for the transportation of oil and gas to parts west of Russia. It's also critical to U.S. and NATO interests; 9/11 enhanced the importance of both the South Caucasus and Central Asia to American security. Flying rights through the Caucasus to Central Asia and Afghanistan are vital components of the ongoing military effort there by both U.S. and NATO forces.

And frustratingly, Georgia was making good progress as it was working to transition itself to an autonomous and democratic post-Soviet nation. That's looking very unlikely right now.

Talk about shades of Czechoslovakia 1968.

What's been equally interesting is Putin's role in the matter, as his voice appears to be trumping that of Dmitri A. Medvedev's. Looks like someone's having a hard time relinquishing power.
Posted by George at 8/11/2008

The Georgians launched a surprise attack on the Russians, not the other way around.

Saakashvili is an authoritarian thug--no friend of democracy or human rights whatsoever--who has come crying to the west for help after he kicked the Bear and got more of a response than he bargained for.

Yes, this looks like the Russians are reacting to the Georgian move into Ossetia, but I stand by my comparison to the Prague Spring on two grounds:

1) Georgia is going thru a process of democratization. Saakashvili may be a thug, but his human rights record is better than his predecessor's and there's been progress in dealing with corruption; there's also been the work building relationships with the West.
2) Russia is clearly working to destabilize geopolitically sensitive regions around its border -- almost as if to create a Warsaw Pact for the 21st century.

I am no history expert, but I am also wondering if the conflict isn't more similar to the Mexican American war. Flood a territory with your own citizens, let them start complaining about oppression, then send in your forces to rescue them and annex the territory.

Hi George, is your headline a joke? It was Georgia who invaded South Ossentia! The real question I suppose is, is Russia's response to repel the invasion going too far...

I hardly see Russia as the "bad guy" in this case..

"The Georgians launched a surprise attack on the Russians, not the other way around."

Georgians launched a surprise attack on whom? The Russians? At what point did Georgian forces invade Russia? Which Russian towns did the Georgian air force bomb?

It would seem that many Russians feel that S. Ossetia and Abkhazia are already Russian territory. There would have been far more cause to be sympathetic toward Russia's intervention if they had confined their strikes and their forces to S. Ossetia. As it is, Russia's bullying would seem to dramatically trump Georgia's.

That said, I'm open to changing my mind somewhat if the 'atrocities' Russia has purported the Georgian forces to have committed turn out to exceed the ordinary amount of collateral damage that attends wars using eastern-bloc weapons. For the same reason, I don't necessarily see cause to indict Russia over what may well be accidental bombings of apartment buildings. Russia's penetration into Georgia and bombing of distant targets, however, would only be justifiable if Georgia had proven itself quite a menace. Until we turn up mass graves in S. Ossetia, I tend to doubt this.

I should perhaps make clear that my nickname has nothing to do with the North Atlantic Treaty Organization, and is rather a concatenated alternative of "Nate-o".

The Abkhazians and Ossetians are ethnically-distinct groups who have lived in those provinces for centuries; hardly recent arrivals. They've never wanted to be part of independent Georgia; they set up de-facto independent splinter states in the early 1990s, shortly after Georgia became independent. Russia gave a lot of them Russian citizenship, but they have not been "flooding the territory with" people who were not there in the first place.

The indiscriminate shelling accompanying the Georgian invasion of South Ossetia last week destroyed villages and killed hundreds of people, perhaps thousands (a lot of these people have Russian citizenship, remember), and set waves of refugees fleeing across the border into Russia. The Georgians also killed and wounded Russian peacekeeping troops who had been in South Ossetia for years by mutual agreement.

How in the world did the Georgians think Russia was going to react to this? How do you think the US would react if American citizens and soldiers were being killed under comparable circumstances?

The fact that the Russians pushed somewhat beyond the disputed areas, for (to be blunt) punitive reasons, is hardly surprising either.

Yes, Russia's government is a dangerous authoritarian regime and has been bullying its neighbors, often with no provocation at all. But in this particular case, no government in the world could have let the Georgian actions stand without a forceful response. The regime would have been in trouble with its own people if it hadn't reacted strongly.

Infidel753, I wouldn't necessarily want to excuse Georgia's incursion into S Ossetia, but it's not as if there hadn't been shelling going both ways, and it's also not as if Russia has been coy in their encouragement of separatists. If the US had peacekeepers in a province and weren't preventing the shelling or mass rearming of the populace, I'd not blame those who thought that we blatantly favoring one side. In Kosovo, NATO was fairly assertive about pursuing Albanian insurgents. Of this I have personal experience. Russia's "peacekeepers" did not appear to be doing that. This doesn't give Georgia the right to kill them, certainly, but it does create a scenario in which Georgia has a plausibly-legitimate right to take matters into their own hands. The movement into S. Ossetia was foolhardy and crude, but neither was it all that blatantly wrong. Russia's response seems to be an intentional overreaction.

Just as a follow-up, Eric Margolis nails it on the head here about the conflict:

nigel, I can't get on board with your idea that Margolis "nails it on the head." Some quotes:

"Washington likely backed this attack or at least knew of it."

Though not an impossible scenario, most reports are that Washington was quite surprised. One would need something other than bald asseveration to carry this rather important point.

"The Caucasus is Russia's backyard. Imagine Washington's response if Russian troops were deployed to Quebec."

How is this parallel? I doubt Margolis would take the position that the rest of the world should do nothing to support Canada if the US invaded it, because Quebec is the US's backyard.

"Hypocrisy was thicker than shellfire. Bush, who ordered the invasion of Afghanistan, Iraq and Somalia..."

Somalia? That was a different Bush and had a UN mandate. Afghanistan also had international support and is largely a NATO mission. Iraq is more or less indefensible, but neither does that imply that Russia should try to one-up the US.

"The West must accept that Russia has vital national interests in the Caucasus and former U.S.S.R. Russia is a great power and must be afforded respect. The days of treating Russia like a banana republic are over.

The most important foreign policy concern for the U.S. is keeping correct relations with Russia, which has thousands of nuclear warheads pointed at North America. Georgia is a sideshow."

In other words, Russia is powerful, Georgia is not, so we shouldn't try to help Georgia. What terrible reasoning.

Do you play chess?...
You have to see a few moves further down the road ;-)

Maybee some other block needed to *sacrifice* a pawn (Georgia) so that Poland would finally sign the missile shield deal and some bordering (with Russia) states would seriously start contemplating joining NATO ranks?

I hate to see this as a chess game. It's the 21st century, and one would think that Russia's greatest mistake is viewing their friction with the West as being a matter of Great Gamesmanship. Isn't it rather past time to get over this sort of thing?