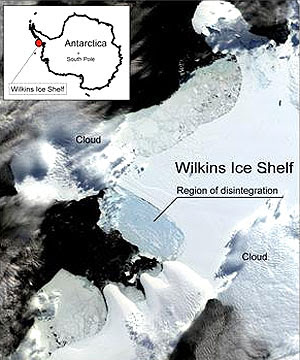 A gigantic Antarctic ice shelf is collapsing
and global warming is being blamed.
Posted by George at 3/26/2008

Five years ago, scientists estimated that it would take a century for the polar ice caps to melt. Two years ago that number became 30 years. Now they think we could have an ice-free Arctic by 2013.

Yes, anon martin, except if we are to have an ice-free Arctic by 2013, the Arctic is certainly going about it the wrong way. Someone needs to update his arctic ice anomaly readings.
;-)

First evidence of under-ice volcanic eruption in Antarctica
The volcano on the West Antarctic Ice Sheet erupted 2000 years ago and remains active.

The volcano is located beneath the West Antarctic ice sheet in the Hudson Mountains at latitude 74.6 South, longitude 97 West.
The subglacial volcano has a volcanic explosion index of around 3-4. Heat from the volcano creates melt-water that lubricates the base of the ice sheet and increases the flow towards the sea.